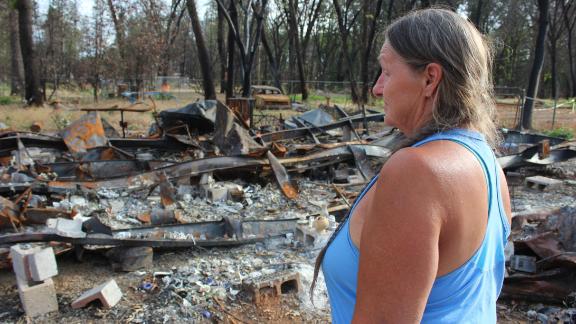 Cathy Muncy lost her home in California's Camp Fire last year. Recently, she was able to move into an RV donated by CNN Hero Woody Faircloth. She shows what's left where her home once stood.

The nation watched with horror last November as wildfire in northern California ravaged the town of Paradise and surrounding communities.

The Camp Fire—named after its place of origin in Butte County—was the deadliest and most destructive wildfire in California history, killing 85 civilians and destroying nearly 14,000 residences. More than 50,000 people were left homeless.

Watching the news coverage from his home in Denver, Colorado, Woody Faircloth was saddened by the devastation.

"There are people that lived lives like we do, that went to work every day, went to school and had very normal lives that now find themselves homeless with nowhere to turn, nowhere to live. I just couldn't imagine being in that position," said Faircloth, a father of four.

"I had a hard time letting it go ... I knew I wanted to do something to help."

Faircloth browsed Craigslist in the areas affected by the fires and saw an enormous need for temporary housing for evacuees. So, he set up a GoFundMe page and invited people to donate so they could purchase and restore a used RV for a family.

"People want to help in these situations, but they just don't know how to," Faircloth said. "All the pieces fell into place."

Through social media, Faircloth eventually got connected with a family of six that was greatly in need. Just before Thanksgiving, Faircloth filled the RV with supplies and -- along with his youngest daughter, 7-year-old Luna -- embarked on the nearly 1,200-mile drive to California to deliver the vehicle.

"When we drove in, it was surreal. Everything was gone. These people really needed help," Faircloth said. "They were really broken down."

That first donated RV led to another, and by December, Faircloth had more than 100 requests for RVs from afflicted families.

"Shelter is such a basic need. To provide that to someone, it's just such a powerful connector," he said.

Witnessing how great the need was, Faircloth turned his idea into a nonprofit, RV4CampfireFamily.

"If we have a platform to help, we have to keep helping," said Faircloth, whose group has so far given more than 65 RVs to Camp Fire survivors.

Today, only a minimal amount of rebuilding has begun in Paradise and a majority of the area's displaced population is still homeless.

Faircloth connects with RV owners interested in donating or selling their used RVs at a low cost. He refits the RVs himself and negotiates costs when he needs to enlist professional mechanics for heavy-duty repairs. Once the RV is ready to go, Faircloth organizes a way to transport it to the recipient.

The work is constant for Faircloth, who juggles it with his fulltime job as an account manager. But seeing the impact of his efforts inspires him to keep going.

"We have made connections with people at their most vulnerable. It's such a powerful thing for people who are on the receiving end," Faircloth said.

CNN's Laura Klairmont spoke with Faircloth about his work. Below is an edited version of their conversation.

CNN: When you first set out to help, how did you decide to donate an RV?

Woody Faircloth: In every kind of social media forum that I saw, I was just blown away at people crying out for help. There were too many people and not enough resources to go around. The biggest clear need that I saw was housing. They didn't have a place to stay, and they were sleeping in their car, in a tent at the parking lot. The hotels were full and done. And the smoke was still really bad, the fire was still actively burning. It takes months to mobilize housing through FEMA and the government and that need was being unmet. It was just awful what was happening.

RVs, when it boils down to it, they're really made for camping. These are not long-term living situations. But when you're living in your car or a tent, it's like moving into the nicest home you've ever lived in. I didn't know anything about RVs. I've never been in an RV in my life. And so I just kind of threw that out there not realizing that we'd be driving soon to California in an RV. But it all kind of came together.

CNN: What were your initial impressions when you first arrived in the area devasted by the fires?

Faircloth: When we drove in, right on the highway as you're coming into town, you could visibly see the burn scar, how it had come down the hill and burned across the highway, and where it actually stopped.

Even when we arrived, three weeks after the fire, there were thousands of people in tents, sleeping in their cars. It was an apocalyptic scene. I mean, there were people literally wandering around with blankets on their shoulders, just begging for help, asking for a ride out of town. It was still very limited relief services there. It was chaos. And it was really scary.

Every person we met there was somehow impacted by the fire personally. They had lost their home, their job, their place of business, they had even lost loved ones. It was horrifying. I would say that everyone we encountered was in shock. They've been through something that's pretty powerful. I've never seen this look in someone's eye before, but it's what I've come to know as trauma. And that really brought it home for me, that these people are suffering.

CNN: What has this work taught you about the power of giving?

Faircloth: I think one of the things I've learned in this process is people want to help. It just turned into something that I never could have imagined. Donations really started coming in. People started contacting me offering to donate RVs they owned as well. So, that's when I knew it was something just clearly bigger than what we had set out to do.

I think people genuinely are good, they just don't know how to help. And I think we tapped into a way that people could help, and it was very tangible, and it was very real, and there were real people attached to it. (The recipients are) blown away that these strangers have shown up with an RV and other people from all over the country have donated them. It's a really powerful thing.

Want to get involved? Check out the RV4CampfireFamily website and see how to help.