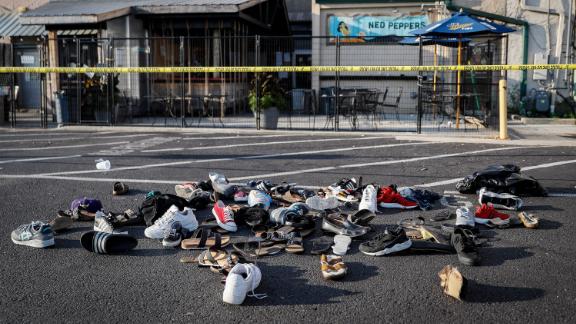 New cell phone video has been released from inside a Dayton, Ohio, bar where nine people were killed after a gunman opened fire. CNN's Brynn Gingras reports.

Betts spent more than an hour at Blind Bob's bar after entering before a woman who appears to be his sister Megan and a third person, according to the video reviewed by CNN.

Connor Betts, 24, does not stand out, dressed like others at the bar in T-shirt, shorts and sneakers. The vest and mask he will wear later during the shooting are not visible.

The three can be seen entering the Dayton bar at approximately 11:09 p.m. ET on Saturday night. The footage shows Connor Betts walking in first, being carded and getting a wristband, then waiting for the two others to enter. He is seen on the surveillance camera moving to the patio and back to the bar.

The security camera footage, which the bar provided to authorities, shows an "11:20" time stamp but the camera clock is approximately 11 minutes fast, according to the bar staff.

Police have only described the friend as a companion, but based on photos and interviews with acquaintances, CNN has learned he is Charles Beard. The Daily Mail was first to identify Beard.

Dayton police said Monday that they have talked to the friend and said there is no information to suggest he or Betts' sister were aware that Connor Betts had weapons.

Beard's father would not comment when CNN approached to ask about his son.

A law enforcement source familiar with the investigation told CNN that Connor Betts parked his car nearby around 11 p.m. and confirmed that Betts went to Blind Bob's with his sister and Beard before the shooting.

About an hour after he entered, at 12:13 a.m., Betts is seen stopping by the entrance, speaking with staff at the door, then exiting.

Beard and Megan Betts remain in the bar for approximately 45 minutes before they are seen leaving at around 12:59 a.m., a timeline that has not been reported before.

Dayton's police chief said Monday that Betts separated from the other two "later in the evening" and authorities were trying to understand what Betts did between the time he left his sister and his friend and before he started shooting.

"The information we have is they all came in the same vehicle but they separated at some point," Chief Richard Biehl said at a news conference. Biehl also said there was a communication between Betts and his companion after the separated but did not provide any other details.

"We do know there was some communication once they separated," Biehl said Monday.

Nothing in the video indicates an altercation or any other event that could give a clue as to what prompted the rampage to come.

Minutes later at 1:06 a.m. on Sunday, the first calls came into 911 to report the shooting. Megan Betts was shot and killed along with eight other people.

Beard was wounded. Police said he was shot in the lower torso.

Police said Betts fired 41 shots before he was killed by officers who were in the area on patrol.

The bar cameras captured Connor Betts one more time, after the shooting had started, when his silhouette is seen running past the outdoor patio, as people scramble and duck from the shooting.

Multiple acquaintances confirmed it is Betts in the surveillance video.

In addition, an employee of Blind Bob's tells CNN that Betts has frequented the bar before, using his credit card for small tabs. Employees of the bar say they saw Betts at the bar earlier the night of the shooting, as well as on Friday night. The last charge on Betts' credit card is from June 24, according to credit card records obtained by CNN.

Dayton police would not confirm to CNN that any of the images match their investigation, but said in a statement: "Through our investigation, we are aware the suspect did frequent bars in the Oregon District on a regular basis."

A witness who rushed to help the injured immediately after the shooting said she assisted Megan Betts. Sarah Reeves also said Beard had been shot, "He just kept asking about Megan; he wanted to know if she was OK. He was moaning a lot. People were trying to assist him, including my fiancé."

Reeves and her fiancé, Benjamin Fox, said that Megan and Beard appeared to be wearing the same clothing seen in the video as when they encountered them after the shooting.