Tom Brady and Gisele Bündchen's Boston-area mansion was just listed for a cool $39,500,000 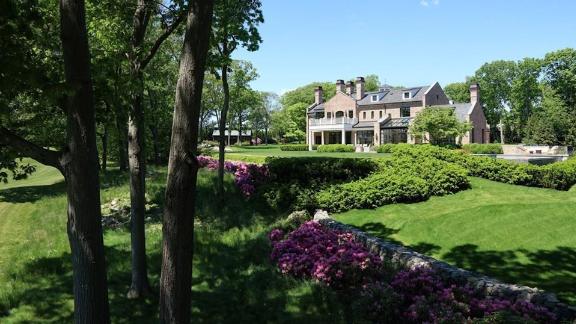 NFL star Tom Brady and his wife, supermodel Gisele Bundchen, have listed their home outside of Boston for $39.5 million.

The sprawling pad Brady shares with supermodel wife Gisele Bündchen is stuffed with five bedrooms plus a wine room, gym, spa, pool and an organic herb and vegetable garden, per the listing, which posted on numerous real estate websites early Tuesday morning and remains active.

CNN reached out to the listing agent Beth Dickerson at Gibson Sotheby's International Realty for further comment, but we haven't heard back.

The modern castle, which is lined in brick and stone, sits on 5 acres overlooking the ninth hole of a golf course. Aside from the modest three-car garage, the property can fit about 20 cars in its looping driveway -- almost enough room for every starter on the Patriots.

Visitors of Brady and Bündchen get the most "zen" accommodations on the property: Their "barn-inspired" guest house is outfitted with a yoga studio and walls that open up to let in fresh air wafting off the couple's immaculately trimmed lawn.

All of this could be yours, as long as you've got nearly $40 million.

But does the listing mean Brady, considered the GOAT by Bostonians and bandwagoners, is already prepping for his eventual retirement?

Well, maybe not just yet. NFL Network's Ian Rapoport reported Monday that the star quarterback signed a contract extension with the Pats for one more season but will become a free agent in 2020.

If Brady does leave the northeast, it's possible he won't go far: The New York Post reported he and his wife were house-hunting in New York suburbs and looking into city schools. Plus, the pair already own a $25 million apartment in the city's Tribeca neighborhood.