Shooting victims remembered in a vigil outside NRA headquarters 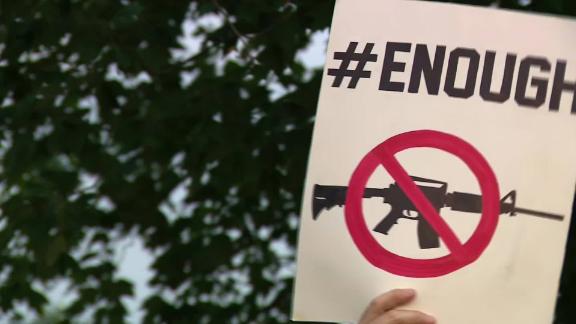 A vigil was held outside of the National Rifle Association's headquarters in Fairfax, Virginia on August 5, 2019 to honor the victims and to call for change.

People gathered Monday night outside National Rifle Association headquarters in Fairfax, Virginia, to hold a vigil for the victims of the weekend's mass shootings in El Paso, Texas, and Dayton, Ohio, and the string of shootings in Chicago.

The vigil was organized by the Northern Virginia chapters of March for Our Lives and the Brady Campaign to Prevent Gun Violence to honor the victims and to demand action from national and state leaders.

"We just don't want to become desensitized for them to think that this is a normal thing, cause it really is every single day these tragedies happen, but we are going to keep up with this and we're not going to forget," March for Our Lives organizer Jasmine Nguyen, 16, told CNN affiliate WJLA.

The NRA has not responded to a request for comment.

"I'm not supposed to be political when I speak to you right now, but it's hard, because, I don't know, is it political to say I'm tired of coming here to this building and the only thing that has changed is that the body count has gone up?" said US Rep. Jennifer Wexton, D-Virginia, according to WJLA. "Is it political to say that kids and adults shouldn't be gunned down when they're doing things like shopping for back to school?

In August 2018, protesters and survivors rallied outside NRA headquarters after a mass shooting at Marjory Stoneman Douglas High School in Parkland, Florida.

The latest tragedies "claimed the lives of 32 people and resulted in at least 62 injuries," the protest organizers said in a statement. "They add to the roughly 21,000 firearm deaths and 59,000 firearm injuries estimated to have taken place already this year. The trauma that this violence has wrought is immeasurable. It will linger for generations."