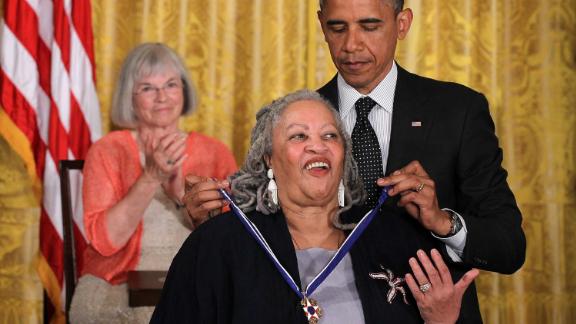 On Tuesday, May 29th, 2012, President Barack Obama delivered remarks about Toni Morrison at a ceremony awarding her with the Presidential Medal of Freedom.

Toni Morrison's death this week at 88 comes at a fraught moment, when the country feels trapped in a hornets' nest of racist rage and violence. America is being summoned, yet again, to atone for its original sin, white supremacy.

But the horrors of recent days remind us that Morrison made art that was urgently political. Her work signifies the social and cultural transfigurations dominating the American landscape at the hinge binding two centuries.

If poets, as Percy Bysshe Shelley wrote, are the unacknowledged legislators of the world, then perhaps novelists are the advocates. They are the petitioners for people's right to be as complex and distinctive and strange as they can be. The greater and more ambitious the novelist, the more demanding she is of her readers' understanding, not just of how words fit together, but of how much the characters remind readers of people they know -- and how much those characters' struggles intersect with their own, no matter their differences in age, class, race or sex.

Morrison was a committed and persuasive advocate for human complexity. She was an African American woman writing from the perspective of her culture and background. Yet, as with her fellow Nobel laureates William Faulkner, Gabriel Garcia Marquez and Saul Bellow, she magnified her experience and the history of her people through language and imagery that made it impossible for all but the most blinkered skeptics to see something of themselves in her books.

Whether it was the young black girl in Morrison's 1970 debut, "The Bluest Eye," psychically deformed by her yearning for blond hair and white skin; the title character in "Sula," who fights for the right to be her own person despite what her own community demands; the desperate enslaved woman in "Beloved," who murders her own daughter as salvation from bondage; Milkman Dead, the daring young hero of "Song of Solomon," whose ability to fly only goads him toward a deeper transcendence from racism and dread, Morrison made them all live in readers' hearts through an alchemy of music, magic and mood.

But she didn't stop with giving people dreams, to paraphrase what the late critic John Leonard, her friend and greatest advocate, said about her. Morrison wanted to share her sense of her people's possibilities for growth and change. In doing so, she hoped to make the whole world change its perceptions of black Americans and acknowledge both its complicity in their oppression and its obligation to transform itself into a community as generous, spirited and empathetic as the one that raised her. First you imagine, she seemed to say. Then you act.

"I am not interested in indulging myself in some private, closed exercise of my imagination that fulfills only the obligation of my personal dreams," she wrote. "It seems to me that the best art is political and you ought to make it unquestionably political and irrevocably beautiful at the same time."

Her books will outlast the present moment, even with its traumatic violence and divisive rhetoric, because of that irrevocable beauty she cites above.

It's sad that Morrison won't be here to guide us out of our current catastrophe. But if more and greater books from the countless authors she inspired follow in her wake -- and they have -- it will be because she lighted the way for them.

Hi: 60° Lo: 37°
Feels Like: 40°
More Weather
We'll start Friday off dry, but the chance of rain returns. Scattered showers will be possible by late morning until the evening.