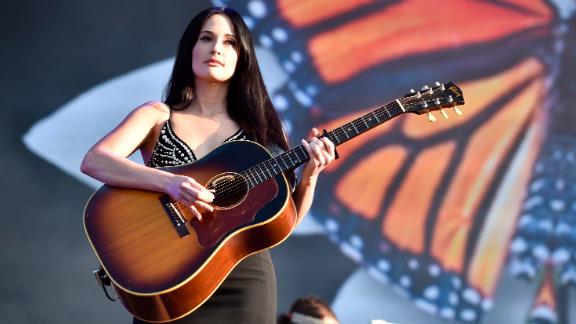 From musicians like Rihanna and Kacey Musgraves to actors like Aaron Paul, celebrities called for action and compassion after the tragic mass shootings in Texas and Ohio.

Kacey Musgraves dedicated her Sunday night set at Lollapalooza "to everyone who has the bravery to even show up to a music festival," a reference to the 2017 massacre at a Las Vegas country music fest, and this weekend's two mass shootings El Paso, Texas, and Dayton, Ohio.

Before she performed her ballad, "Rainbow," the singer invited the crowd to join her in yelling "somebody f***ing do something!"

The crowd's roar was deafening.

She took to Twitter to call on President Trump make changes to gun laws.

"Don't you hear us, @realDonaldTrump? Don't you hear our pain? You have the power to become a hero. Why don't you take it?" she wrote.

"For a man who clearly loves being well-liked, it's indescribably mind-numbing to see him blatantly and murderously ignore doing ONE THING that would not only make people happy but would SAVE PEOPLE'S LIVES. True leaders don't stand back and watch the world burn @realDonaldTrump," Musgraves wrote in a subsequent tweet.

Musgraves also performed a cover of Gloria Gaynor's "I Will Survive" and numerous songs from "Golden Hour," which won album of the year award at this year's Grammys.