When chaos erupted in El Paso, this Army soldier's first response was to save the lives of children 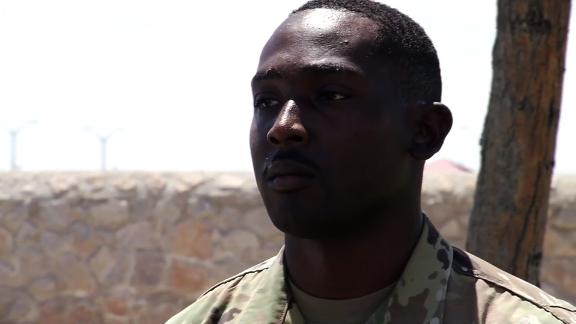 Pfc. Glendon Oakley says the focus should not be on him after he helped get kids in a shopping mall to safety during an active shooting at a nearby Walmart in El Paso, Texas.

Army Pfc. Glendon Oakley was shopping for a jersey Saturday when a child came into the El Paso, Texas, store and said there was a shooter at the nearby Walmart.

Oakley told CNN no one in the store, including him, paid attention because they didn't understand what the child was talking about. Oakley said he then walked to another store.

"I just heard two gunshots and a whole bunch of people started running around and screaming," Oakley said.

As mayhem erupted over the next five to seven minutes, the armed Oakley planned to go with others who ran out of the store toward the gunshots.

"But I see a whole bunch of kids running around without their parents. Only thing I think of is pick up as many kids I can as possible," Oakley said.

He and another man began corralling children. There were about 13, Oakley said, but he could only carry three.

"I was just focused on the kids, I wasn't really worried about myself. So just put my head down and just ran as fast as I could," he said. "They were anxious, when they were in my arms, they were trying to jump out of my arms but trying to keep them as tight as possible. They are kids, so they don't understand what is going on."

Once he saw police, he said he let the kids go and pulled out his phone "in case they were going to shoot me and started recording while I was running."

Oakley said he wasn't concerned with his safety, rather getting the children out of harm's way.

"I was just thinking about if I had a child and I wasn't around, how I would want another man to react if they saw my child running around," Oakley said.

Oakley told CNN affiliate KFOX that he did what he was supposed to do and he doesn't want the limelight on him.

CNN attempted to reach the soldier on Sunday.

Oakley said the media's focus should be on the world and the shooting in Ohio.

"The spotlight should not be on me right now," he said. "I need the media to go out to the families and make sure they're OK ... I understand what I did was heroic, but I did that because that's what I was trained to do and that's what the military has taught me to do."