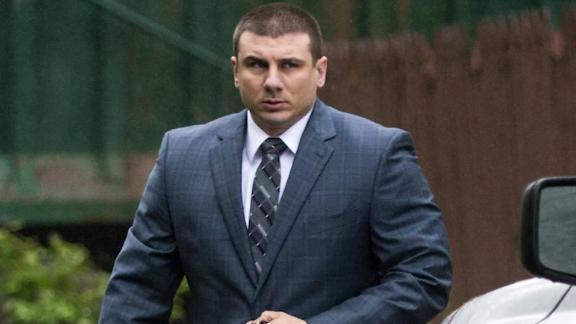 A judge recommended that the NYPD should terminate the officer involved in the death of Eric Garner, according to a source with direct knowledge of the decision.

The New York Police Department officer at the center of the arrest that allegedly led to Eric Garner's death is expected to learn as early as Friday the latest decision in a process that could end his career, two senior law enforcement officials and a city official told CNN.

Daniel Pantaleo's career has been in jeopardy since he was caught on video in July 2014 putting the unarmed black father in an alleged chokehold. Now, after a spring disciplinary trial, NYPD Deputy Commissioner of Trials Rosemarie Maldonado is expected to deliver, perhaps by week's end, her recommendation on whether Pantaleo should be terminated to Police Commissioner James O'Neill and officials with the city agency charged with NYPD oversight.

Civilian Complaint Review Board leaders and Pantaleo's attorney then will have about two weeks to draft a response, and O'Neill has the final say; he's never hinted at what he may do. The crux of the case remains whether Pantaleo used a chokehold, which is banned by the NYPD; the officer denies he used the move.

"There's going to be justice. I have confidence in that," de Blasio said during the debate, adding that Pantaleo's professional fate should be decided within the next 30 days. "For the first time, we are not waiting on the federal Justice Department, which told the city of New York that we could not proceed because the Justice Department was pursuing their prosecution."

O'Neill weighed in Thursday morning on the overall timetable for the pending Pantaleo decision.

"I'm anticipating that that should come shortly, you know, within the next week or two, and then we'll move forward," O'Neill said on the "The Joe Piscopo Show" on AM 970 The Answer.

Garner died on July 17, 2014, after police attempted to arrest the 43-year-old father of six, who was allegedly selling loose cigarettes illegally on Staten Island, a crime for which he previously he had been arrested.

Garner's friend, Ramsey Orta, recorded the confrontation on his cell phone as it quickly escalated.

In the video, Pantaleo can be seen wrapping one arm around Garner's shoulder and the other around his neck before jerking him back and pulling him to the ground. As Pantaleo forces Garner's head into the sidewalk, Garner can be heard saying, "I can't breathe. I can't breathe."

Federal investigators began examining the circumstances of Garner's death in 2014, after a grand jury in New York declined to indict the Staten Island officer. The city settled with Garner's estate in 2015 for $5.9 million.

Meanwhile, Pantaleo has been on desk duty since the incident.

Activists and lawyers for the Civilian Complaint Review Board call the maneuver Pantaleo used on Garner an illegal chokehold. But union officials and the officer's lawyers describe it as a "seatbelt hold" -- a takedown move taught to rookies at the police academy -- and blame Garner's death on his poor health.

"Mr. Garner died from being morbidly obese" and having other health issues, Pantaleo's attorney, Stuart London, said earlier this year. "He was a ticking time bomb and set these facts in motion by resisting arrest."

Garner's death brought the Black Lives Matter movement to the forefront in New York, with protesters marching in the streets. Five years later, Garner's death remains a fervent topic locally and on the national stage.

"To the protestors in the audience today: I heard you. I saw you. I thank you," de Blasio tweeted. "This is what democracy looks like and no one said it was pretty."

Garner's daugher, Emerald Garner.,told CNN's Brooke Baldwin that she didn't know protestors were going to yell during the presidential debate. But she said she regarded it as a powerful moment - not only because it put her family's pain on a national stage, but because it's the same thing she said she has been screaming for the past five years.