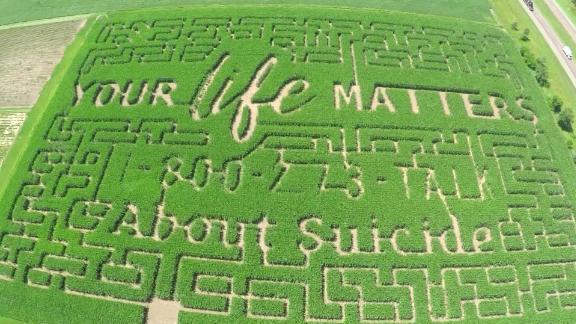 The corn maze at Govin's Farm has been a fall tradition in Menomonie, Wisconsin, for more than a decade, but this year, it is also spreading an important suicide prevention message.

John and Julie Govin came up with the idea after losing a family member to suicide in January.

He said the family picks themes for the maze that are important to them. Previous designs have honored the Boy Scouts, their fellow farmers, Alzheimer's awareness, country star Garth Brooks and two mazes featuring the Green Bay Packers.

The maze is a big part of the farm's income, so tackling such a serious topic was a tough business decision.

"We worried that it may drive people away from our farm instead of driving them to our farm," Govin said. He talked to other corn maze operators who thought it was a great idea.

"It's been such a positive experience. We didn't really know what to expect," he said.

The maze doesn't open until September 21, but he says the family has gotten a huge positive response, both online and in real life.

"My wife was at work yesterday, and she said she couldn't get anything done because she works for a large employer and she says people were constantly coming into her office to thank her or to relate a story that they have," he said. "It's truly remarkable."

They plan to donate some of the proceeds to several suicide prevention groups.

"We are really doing this in the hope that we can prevent another family from going through what we've gone through," Govin said.