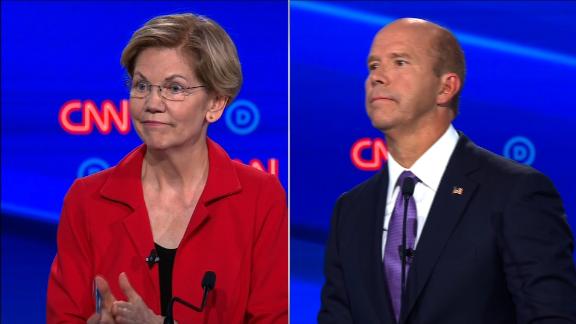 During CNN's 2020 Democratic primary debate, John Delaney speaks about Sen. Elizabeth Warren's health plan which he would be subject to, given his net worth.

Don't have a clue about the black moon that North America can see today? Here's everything you need to know about it.

And here's what else you need to know to Get Up to Speed and Out the Door. (You can also get "5 Things You Need to Know Today" delivered to your inbox daily. Sign up here.)

Elizabeth Warren vs. Bernie Sanders was supposed to be the big matchup at last night's CNN Democratic debate in Detroit. Turns out, moderates vs. progressives is the battle this particular debate will be remembered for. Progressive icons Warren and Sanders fought back attacks from a gaggle of lower-polling moderate candidates, who argue the ideas espoused by the progressives are too far left and will just hand re-election to President Trump. Warren pushed back, saying the Democratic Party should be "the party of big, structural change." You can listen to the entire debate in this podcast.

Here are seven takeaways from the debate, a look at who won and who lost, a gallery of the night's best pictures, a fact check and the best of the late-night comedians' take on the event. And don't forget that we all get to do this again tonight. Ten more Dems will take the stage at Detroit's Fox Theatre. All eyes will be on the anticipated rematch between Joe Biden and Kamala Harris. You can watch tonight's debate on all of CNN's platforms, beginning at 8 ET.

North Korea is at it again. The North launched a pair of short-range ballistic missiles off its east coast, South Korean and US officials said. That's the second such launch in less than a week. In response, South Korea held an emergency National Security Council meeting this morning. It's not clear if the missile launches will affect the working-level talks between the US and the North, which US Secretary of State Mike Pompeo hoped would start soon. It was just a month ago when President Trump and North Korean leader Kim Jong Un met at the Korean Demilitarized Zone, and Trump became the first sitting US President to set foot on North Korean soil.

The woman charged in that massive hack of Capital One may have hit other targets. Paige Thompson, an ex-engineer, has already been charged by the Justice Department with downloading the personal data of more than 100 million Capital One customers. Now, there might be evidence that Thompson hacked other companies and organizations as well, according to the criminal complaint filed against her. The complaint references an internet messaging channel where a person believed to be Thompson allegedly posted filenames of hacked files from Ford, Michigan State University, Vodafone, Ohio's transportation department and Infoblox. None of those organizations said they had been hacked. If you're a Capital One customer and worried about the hack, here's what you can do to protect yourself.

Here's a shocking and disheartening stat: More civilians in Afghanistan were killed by international coalition and Afghan forces than by the Taliban and other militant groups in the first half 2019. Some 1,366 civilians died in conflict in the first six months of the year, a report from the UN Assistance Mission in Afghanistan said. Only 38% of those deaths were caused by the Taliban. The rest were attributed to other parties, including Afghan and the US-led international coalition troops. This is all happening as the Afghan government engages in talks with the Taliban. President Trump has indicated he wants to reduce US troop levels in the country -- where America has been fighting its longest-running war -- before the 2020 election.

The heat wave that just roasted Europe is now toasting Greenland. That's bad news for everybody. Greenland, home to the world's second-largest ice sheet, is expected to have significant ice melt as temperatures edge near record levels. Just this month, Greenland's ice sheet lost 160 billion tons of ice, the equivalent of 64 million Olympic-sized swimming pools. The effects of the ice melt will be felt across the globe. The melt will flood the North Atlantic with freshwater, which could affect the weather in northwestern Europe and lead to stronger storms. Sea levels will rise. And it will fuel a cycle of extreme weather that has caused Greenland to endure near-record heat just after its coldest year in decades.

What's in a name?

"Pink Lady Bandit." "Attila the Bun." "Dollar Store Grandpa." Ever wonder why the FBI comes up with such crazy nicknames for bank robbery suspects?

A 3-year-old boy in China fell six stories from a building. Thankfully, the crowd below saved him with a blanket.

It's the last thing you'd expect to see at the US-Mexico border: seesaws. Artists installed them so kids in the two countries could play together.

Say goodbye to Jill Ellis. The legendary coach of the US Women's National Team is stepping down after leading her team to back-to-back World Cup titles.

Guess NASA's Mars 2020 rover is going to stay fit while it's on the Red Planet. Watch it perform a bicep curl for engineers.

The Federal Reserve is expected to announce an interest rate cut today, although many wonder why it would do that at a time of low unemployment and a strong economy.

Cuteness alert! It's an adorable kitty playing around while sitting in a doughnut pillow. What else could you want on hump day? (Click to view.)

An earlier version incorrectly characterized the international military forces referred to by the UN Assistance Mission. This has been updated to clarify that the forces concerned are those of the US-led international coalition.