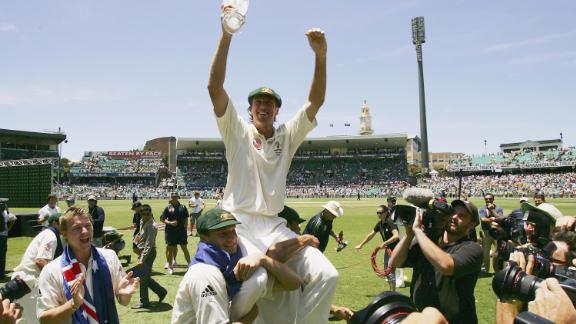 A Romanian cricket player has become an overnight internet sensation after some of the sport's biggest names came out to bat away online mockery.

Pavel Florin, a 40-year-old professional bodyguard and president of Romania's Cluj Cricket Club, which is in Transylvania, caused a stir after his bowling performance was uploaded to social media.

An amateur cricketer who only took up the sport eight years ago, Florin's lack of pace and distinctive bowling action was harshly criticized online despite him still not having fully recovered from a broken leg.

But while some appeared keen to mock, a number of the sport's most recognizable figures came out in support of Florin, who was competing in the 10-over event in Spain.

"Cricket is a beautiful game," Australian cricket legend Shane Warne tweeted. "Well done and congrats to everyone who made this happen. I would love to check this tournament out next year & help out, if you need a helping hand then hit me up! Congrats again."

READ: The Ashes: Sledging and the bitter fight for iconic miniscule trophy

Former England player Dimi Mascarenhas also gave Florin his backing, tweeting: "This is the first born & bred Romanian playing cricket. We should be celebrating this amazing achievement. A lot of hard work by some brilliant people have made this happen. Let's just watch and celebrate this truly awesome tournament."

"Pavel Florin the Romanian cricketer should be trending, absolute hero," he tweeted.

"Honestly nothing to do with him able to hunt me down & kill me in 0.2 seconds but his passion for cricket is great. His ability to realize he's no world beater and NOT CARE what people think "

Florin, who says his biggest achievement in cricket is a top score of 36 and taking two wickets in three overs, was philosophical after his performance.

"Maybe someone says my bowling is not beautiful or not effective, but I don't care, because I love cricket," Florin told the European Cricket League:

"It's not beautiful, I know, everybody says it, but I'm a slow bowler."

READ: How 'luck of the Irish' and 'Allah' inspired England's World Cup win

Cricket is not widely played in Romania but that has not dimmed Florin's enthusiasm for the sport.

In an interview with the European Cricket League, Florin recalled how he once drove 500 kilometers through the night to make sure he could play in a game the following morning.

After driving for nine straight hours, he finished unbeaten on 34 runs.

His team Cluj is taking part in the first edition of the ECL which consists of eight teams including clubs from Italy, Spain and the Netherlands.