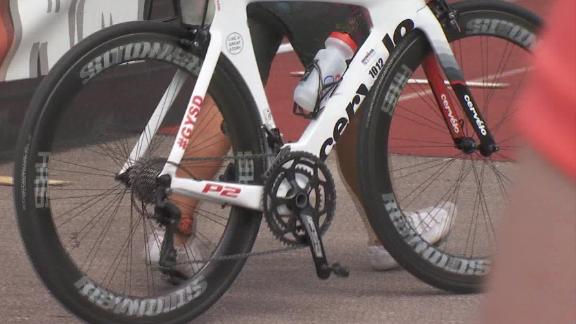 Ironman triathlon participant Kristen J. Oswald died after being hit by a semi-truck while competing in the race outside Columbus, Ohio.

A cyclist participating in an Ohio Ironman triathlon died Sunday after being hit by a semi during the race.

Authorities said Kristen J. Oswald, 44, of Royersford, Pennsylvania, was struck just before 9 a.m. on US 23 in Delaware County, just outside Columbus.

A safety zone had been set up for riders in the Ironman 70.3 Ohio race, and there was a reduced-speed zone for motorists, the Ohio State Highway Patrol said in a statement.

The statement says Oswald rode her bike out of the safety zone into the left-hand lane of the highway and was hit by the tractor-trailer. She was pronounced dead at the scene. Alcohol and drugs were not suspected to be a factor.

"We are deeply saddened to confirm the death of one of our athletes at IRONMAN 70.3 Ohio. Shortly after beginning the bike portion of the race, there was an incident with the athlete and a vehicle. Our condolences go out to the athlete's family and friends, whom we will continue to support," the organizers said in a statement.

"We are continuing to work with local and state authorities to gather all the details of how this incident occurred and will assist them in any way possible."

The Ohio State Highway Patrol is continuing to investigate the incident.

Two men died in June during the swimming portion of an Ironman race in Madison, Wisconsin.