'They thought it was a hoax.' Stunned Gilroy residents try to return to normal with a mixture of fear and determination 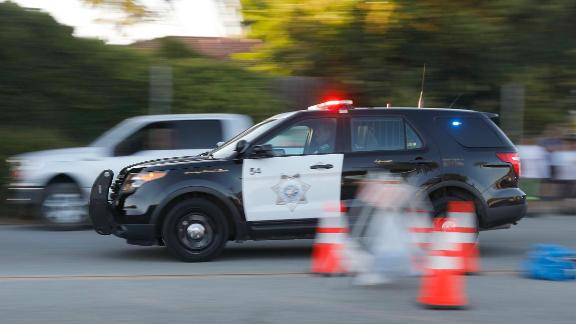 Law enforcement officials are searching for answers after a gunman killed three and injured at least 12 people at a festival in Gilroy, California. CNN's Sara Sidner reports.

Marissa Lopez's 14-year-old son had finished his volunteer shift at the Gilroy Garlic Festival and had been home for about an hour when the shooter opened fire, she said Monday.

"My son said, 'This happened and school starts in three weeks,'" Lopez told CNN, noting schools are close to the shooting site. "They're right there. You drop your kid off every day at school and hope for the best."

Now that the gunfire has stopped, the people in this town with a population of 50,000 are looking for a way to move forward -- and to address their fear and uncertainty.

They returned to their routines Monday with a mixture of resignation and determination, stunned that a mass shooting had occurred at their garlic festival, an annual community event, leaving three people dead and at least a dozen injured.

'We are feeling this pain together'

At a vigil Monday night, they embraced and gathered in clusters, speaking quietly about the tragedy -- where they were, how they heard about it and what they felt.

Mayor Roland Velasco told the residents the vigil was an opportunity for them to come together and process their feelings.

"Maybe not today, but there will be a day when we start to heal, and the reason for that is we cannot let the bastard who did this to us tear us down," he said.

At one point, city council member Peter Leroe-Munoz led a chant shouting "We are" as the crowd called back "Gilroy strong."

Sam Liccardo, the mayor of nearby San Jose, spoke to the crowd, saying, "We are feeling this pain together. All of us. But I know that although the pain is not constrained by city limits nor is the inspiration, the strength that I feel here in this Gilroy community."

Resident and business owner Gracie Garcia told CNN that while "it's a very sad day for Gilroy," she refused to be afraid.

Berea Areas says she left the festival before the shooting started, and came to the vigil to show support for the community she has lived in for three years.

"I came because it's so sad to know that this has happened and so painful," she told CNN. "I have daughters the same age as the little boy who was killed. I came to support the people — my neighbors, my people — and the families of the victims."

'It's just so scary'

It seems like everybody in Gilroy went to the festival, or had a family member there.

Lopez said her parents and cousin attended Sunday and, when the shooting started, didn't think anything was wrong.

"They thought it was a hoax," Lopez said. "My cousin said the first few sounds they heard were like 6-7, but it was really slow so they thought it was fireworks, firecrackers. Then all of a sudden it was rapid fire just everywhere."

The festival became chaos as people looked for a way out. "It's just so scary," she said.

"I had a nephew who was there," Melba Hernandez told CNN. "He left at 4:30 with his two boys and one on the way with his wife. You just never know what life comes to now — it's sad because you can't even go anywhere and enjoy yourself no more."

At one point, authorities said they were searching for a second person who might have been involved in the shooting. On Monday, police said multiple people had given differing versions of the second person, so it was unclear if there was actually another person involved.

But the possibility unnerved Hernandez's grandchildren.

"They were pretty disturbed last night," she said. "They talked about how the second shooter would come in through a back door and shoot people down. They had trouble sleeping."

What will happen next?

Many residents were out and about during the day, opening their shops and interacting with customers in a defiant attempt to rebound as a community. But Lopez said a few businesses didn't open Monday. And at restaurants and shops, people mentioned colleagues who had called in sick.

The garlic festival attracts about 100,000 people each year and is a major feel-good event in the small California town.

A question hangs in the air. What will happen to it?

"Will the garlic festival continue?" Lopez said. "Can we move on from this?"