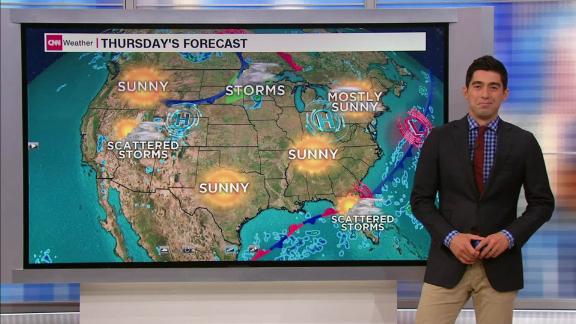 The US will remain dry over the next 2 days with the exceptions of Florida and the Northern Plains. As far as temperatures go, the outlook through the first week of August is above average. Pedram Javaheri has the forecast.

What does our universe look like? NASA has released fascinating new images that will make you wonder what else is really out there.

Well, that was that. Former special counsel Robert Mueller answered questions on Capitol Hill for hours yesterday, and even thought many people considered it must-watch TV, it wasn't the dramatic showdown some were expecting. Perhaps the biggest moment of the day came when California Rep. Ted Lieu asked Mueller if the Office of Legal Counsel guidance against indicting a sitting president was the reason he didn't indict Trump. Initially, Mueller agreed, but later walked back his comment and said that he meant that because of the OLC guidance there was no decision either way on whether to indict. This is important because, according to Lieu, Mueller's first answer essentially confirms Trump did things worthy of indictment. So, did Democratic leaders get what they needed to move forward with impeachment proceedings? The answer isn't clear. House Speaker Nancy Pelosi avoided the question altogether after the hearings. When asked about the day's events, President Trump called the entire investigation into his campaign's ties with Russia a "hoax."

Several alarming incidents have rattled the Korean peninsula this week. North Korea launched two missiles yesterday, putting South Korea on edge. South Korean officials said the missiles were a "new type of short-range missile" and posed a "military threat" which risked undermining the peace process between the two countries. On Tuesday, warplanes from four countries engaged in a chaotic and unprecedented face-off above a small, disputed island off the coast of South Korea and Japan. South Korea, Japan, Russia and China all have different versions of what happened between their military aircraft, but South Korea says they fired more than 300 warning shots at a Russian plane after it repeatedly violated the country's airspace. South Korean officials suspect the move was part of a joint Russian-Chinese military exercise.

Europe has been sweltering under a historic heat wave and today, temperatures are supposed to reach their breaking point. Meteorologists predict temperatures in the UK could reach 102.2 degrees Fahrenheit, while France could see the mercury rise to a shocking 107.6 in Paris. The heat is so bad that Notre Dame's chief architect says the cathedral's fragile ceilings, which were severely damaged in a fire earlier this year, could be at risk of collapsing.

A US Border Patrol chief has admitted to being a member of a secret Facebook group that reportedly contains cruel and lewd posts about migrants. Carla Provost admitted her involvement during her testimony in front of a House Appropriations subcommittee, but said she wasn't directly involved in the posts and rarely interacts on the platform. The groups and posts were discovered in early July, and internal investigators for US Customs and Border Protection have identified 70 people, 62 of whom are current employees, who are connected to the inappropriate posts or the Facebook groups that had such posts.

The general fertility rate in the United States is at an "all-time low," according to the US Centers for Disease Control and Prevention. The 2018 nadir is part of a larger pattern of declining fertility in the US, and for the last few years, that rate has been lower than the rate needed for the population to replace itself. Some of this is due to positive trends, such as a decline in teen birth rates. However, other fertility trends are less positive, like a marked rise in preterm birth rates. That last part is a cause for concern among professionals, and though there is no single reason or theory as to why the preterm birth rate is rising, one expert said it could be attributed to a rise in births among women in their late 30s and 40s.

Late last night, amid protests and rumors, Puerto Rico Gov. Ricardo Rosselló announced he will resign. Rosselló said in a video message on Facebook that he will resign August 2 at 5 p.m. ET. The governor had been expected to announce his resignation earlier Wednesday as lawmakers were ready to begin impeachment proceedings.

Sorry folks, they can drive themselves but you have to figure out the rest.

This ridiculously popular app will make your selfies into Renaissance art

But don't get mad if you don't like how you look as a 15th-century nobleman.

If they don't call it "fake-on" and "fake" then what are we even doing here?

Well OUR studies say a nice hot bath any time will improve anything.

Sacré bleu! Let them be naked in peace!

The amount people have donated to a fund for families of the Kyoto Animation fire victims. The Japanese studio was burned in an arson attack Thursday, leaving 34 people dead.

QUOTE OF THE DAY

"It's like becoming a bird. But it's also very hard. I have to fight against the wind with my legs so there's pain too. It's not as peaceful as it looks."

French inventor Franky Zapata, who recently tried but failed to cross the English Channel on a jet-powered hoverboard

This woodcarving is sooo satisfying! We'd try it ourselves, but our fingers would never be safe. (Click here to view)