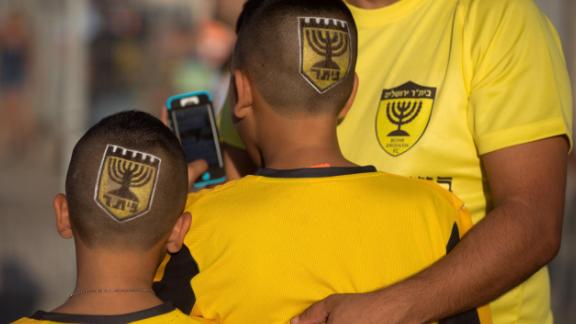 Beitar Jerusalem is tackling racism from football fans with the help of its owner Moshe Hogeg and its new Nigerien signing Ali Mohamed.

He's a soccer player named Ali Mohamed. He's a Christian from Niger but because his name sounds Muslim, that's enough for some soccer fans to want to rename him.

Mohamed is a new member of Beitar Jerusalem, an Israeli club infamous for the racist behavior of some of its fans towards Muslims.

Mohamed was subjected to racist abuse from some fans during an open training session last month. Chants of "Mohamed is dead" and "Ali is dead" were hurled at him as he trained with his new teammates after joining from Maccabi Netanya in the offseason.

Clubs and governing bodies across the sport have traditionally struggled to deal with racism from fans. Moshe Hogeg, Beitar's owner, says the answer is simple -- he's going to sue fans who he says are damaging the club's reputation.

A tech millionaire who purchased the club last August, Hogeg says he will resort to lawsuits to cleanse the club's image and eradicate the anti-Muslim hate spouted by a section of the club's most notorious fans, a group known as "La Familia."

"They are very good fans, they are very loyal," Hogeg told CNN. "They love the club and what it represents ... but they're racist and that's a big problem.

"And this small group has affected the name of hundreds of thousands of amazing Beitar fans that are not racist at all."

Beitar's image has long been tarnished by a minority of fans who are virulently anti-Muslim. It is the only top-flight Israeli club to have never signed an Arab Muslim player and has been repeatedly sanctioned for its abuse of Muslim opponents.

READ: Players should 'step out of the field' if racially abused

In 2013, arsonists attacked the club's administrative offices just days after Beitar had signed two Muslim players from Russian League club Terek Grozny, based in Chechnya. The attack destroyed all the club's trophies.

Though the club has made progress in the intervening years, notably in 2017 when it was awarded a prize by Israeli President Reuven Rivlin for its anti-racism work, the problem persists.

Such was the anger at Ali Mohamed's arrival that "La Familia" published a statement on social media,saying in part: "...we have no problem whatsoever with this player, since he is a devout Christian. But we do have a problem with his name. We will make sure that his name is changed so that Mohamed is not heard at (Beitar's) Teddy Stadium." The post was later deleted.

Hogeg says "changing the name Mohamed is obviously not acceptable" and he's fighting back.

He has threatened to file lawsuits against individual fans seeking damages ranging from nearly $300,000-$500,0000. While no lawsuits have been filed yet, Hogeg's lawyers have sent letters of warning to three fans demanding an apology.

Hogeg says the fans have yet to apologize and the lawsuits will be submitted to the courts when they reopen after summer recess. Members of "La Familia" declined to speak to CNN when approached at a match.

"The police cannot help," Hogeg says. "If you go and file a complaint to the police, regarding racism then the radical fans actually feel like heroes. When you do that you actually incentivize them.

"The way we go is that we sue the person, the specific fan, who is damaging the reputation of the club.

"When they get those lawsuits, they need to protect themselves with their own lawyers, it costs them money. It takes them time and so far, what we've seen is, it's very effective."

"Mohamed scores a goal you'll hear the whole stadium cheering for him and I think it will be a historic moment for this club and an important one."

While the far-right faction of the club's support base has refused to endorse the arrival of Mohamed, others are delighted to have a player of such caliber.

"For me it doesn't matter what his name is or what religion he is, and I think most of the crowd doesn't care about it," Nadav Shtraucler, a supporter for almost 35 years, told CNN.

READ: Racism in football -- 'Worst thing you can do is leave the pitch,' says Mido

READ: Raheem Sterling honored with award with fight against racism

Another fan, Rafi Mizrahi, who says he has followed the club for 38 years, says the fans will receive him (Mohamed) happily."

But he admits there could have been a split in the club's fan base if Mohamed had been Muslim.

"If you ask me you should not allow sport and politics to mix. If someone who wants to come and succeed with Beitar we say, 'welcome' with great honor."

Hogeg's determination to rid the club of racism is evident in his desire to confront the problem.

According to a report by the New Israel Fund's Kick it Out campaign, observers found two cases of racist chanting by Beitar fans during the 2018/19 campaign. That is 15 fewer than in the previous season and 33 fewer than 2016/17.

The report also recorded a total of 19 incidents of racist chanting across the entire Israeli league in 2018/19, down from 54 the previous season.

Hogeg now hopes that the signing of Mohamed will help the club move forward both on and off the field.

"I was surprised to find that Mohamed is not Muslim, but I don't care. Why should it matter? He's a very good player," Hogeg said.

"As long as the player that comes respects the city, respects what he represents, respects Israel, can help the team and wants to play then the door will be open.

"If those radical fans will fight against it they will lose. They will simply lose."