Why the Jeffrey Epstein charges came now, more than a decade later 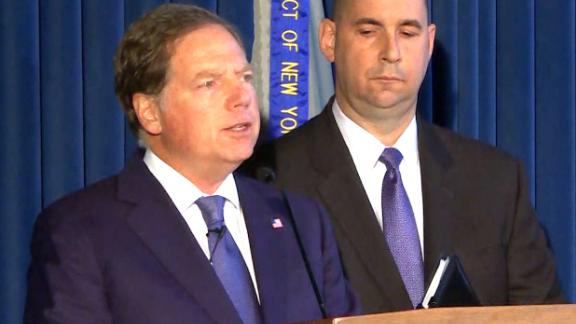 Federal prosecutors in New York unsealed a criminal indictment charging multi-millionaire Jeffrey Epstein with having operated a sex trafficking ring in which he sexually abused dozens of underage girls.

The sex trafficking indictment against multi-millionaire Jeffrey Epstein dates to incidents between 2002 and 2005 and contains allegations that have been public for more than a decade.

Why, then, did prosecutors in New York move to arrest Epstein on Saturday and unseal a federal indictment against him on Monday? Why did this case happen now?

US Attorney Geoffrey Berman declined to spell out the case's exact origins but said it remained vital all these years later.

"It's still a very important case and it means a great deal to the alleged victims here that they have their day in court," he said.

But legal experts said the origins of the case come primarily from The Miami Herald and reporter Julie K. Brown, who wrote an investigative report in November 2018 on what she called the "deal of a lifetime" for Epstein.

In addition, the exact time and place of the arrest -- on a Saturday, as Epstein arrived on a private jet to Teterboro Airport in New Jersey -- was unusual and suggests there is more to the case that has not been made public.

"That they got to him straight from the plane indicates obviously a sense of urgency," former federal prosecutor Jaimie Nawaday explained.

That may be because prosecutors believe he is a flight risk, or it could mean that there may be some ongoing criminal conduct, she said.

According to the indictment, Epstein ran a trafficking enterprise between 2002 and 2005 in which he paid hundreds of dollars in cash to girls as young as 14 to have sex with him at his Manhattan home and his estate in Palm Beach. The indictment also says he worked with employees and associates to lure the girls to his residences and paid some of his victims to recruit other girls for him to abuse.

"In this way, Epstein created a vast network of underage victims for him to sexually exploit, often on a daily basis," Berman said in a statement.

Epstein, a well-connected hedge fund manager, had previously evaded similar charges when he secured a non-prosecution deal with federal prosecutors in Miami. Instead of facing federal charges, Epstein pleaded guilty to two state prostitution charges in 2008 and served just 13 months in prison. He also registered as a sex offender and paid restitution to the victims identified by the FBI.

That arrangement came under intense scrutiny last November in a Miami Herald investigation that examined how it was handled by then-US Attorney Alexander Acosta, who now serves as labor secretary in President Donald Trump's Cabinet.

The Herald investigation said that Acosta agreed not to file federal charges against Epstein despite an investigation identifying 36 underage victims. The agreement, the Herald said, "essentially shut down an ongoing FBI probe" and further granted immunity to "any potential co-conspirators" in the case.

In February, a federal judge in Florida ruled that the Department of Justice broke the law by failing to confer with Epstein's victims about the agreement.

Epstein's attorneys said in court Monday that the non-prosecution agreement would constitute the centerpiece of their defense.

"To us, this indictment is essentially a do-over," an attorney for Epstein, Reid Weingarten, said. "This is the very stuff that was investigated by the feds in Florida."

"When the facts presented themselves -- as Mr. Berman hinted at -- through investigative journalist work, we moved on it," Sweeney said.

"What really drove it lately was the Herald reporting that (showed) this was a real miscarriage of justice," Canaff said.

Nawaday, who previously worked as an Assistant US Attorney in the Southern District of New York, said that generally prosecutors would hold a meeting after seeing a report on par with the Herald's exposé.

"So I imagine what happened here is once the Miami Herald started running these reports, people got together within the US Attorney's office and figured out how they could investigate and charge something very quickly. So there would have been a lot of time pressure, I think, in this investigation," Nawaday said.

While the broad push behind the arrest came from the Herald's reporting, there are several possible explanations for why prosecutors moved to arrest Epstein this weekend at Teterboro Airport in New Jersey.

Canaff, the former child abuse prosecutor, said the Saturday airport arrest had to do with how mobile Epstein is and because prosecutors believe he is a flight risk. If the indictment had been unsealed while he was overseas, prosecutors would have to go through an extradition process to bring him to the US to face charges.

In court Monday, prosecutors argued against granting Epstein bail, saying he was a significant flight risk because of his extraordinary wealth and ability to leave the country.

"He is extraordinarily wealthy, mobile and unattached to the southern district of New York," Assistant US Attorney Alex Rossmiller said.

Prosecutors argued in a court memo that Epstein has homes in Manhattan, Palm Beach, New Mexico and Paris and also owns a private island in the US Virgin Islands. He has three US passports, owns at least 15 vehicles and has access to two private jets, according to the memo.

In fact, Epstein was arrested after spending three weeks abroad, prosecutors said in a court filing.

Another answer is that there may be ongoing criminal conduct that did not end in 2005.

Indeed, after Epstein's arrest, federal agents executed a search warrant of his mansion in New York City and seized a "vast trove" of lewd photographs of young-looking women or girls, prosecutors said in a court filing.

Some of the photos were discovered in a locked safe along with compact discs with hand-written labels that read, "Young [Name] + [Name]," "Misc nudes 1," and "Girl pics nude," according to a court filing.

Rossmiller said in court that when officials entered his home on Saturday, they found "the massage room was still set up in the same way it was 15 years ago, with a massage table and sex paraphernalia."

"Your honor," he said, "This is not an individual who has left his past behind."

Nawaday said this search warrant "adds to the sense that something was urgent here, and there may be more coming."

For now, though, the evidence that sparked that search warrant will remain unknown to the public.

"We know that there were photographs and other evidence seized today, and we also don't know what else was found in his house today," said Elliot Williams, a former prosecutor. "Certainly the prosecutors and the FBI knew they had probable cause to believe there was actionable evidence in his house, so who knows what comes of that."