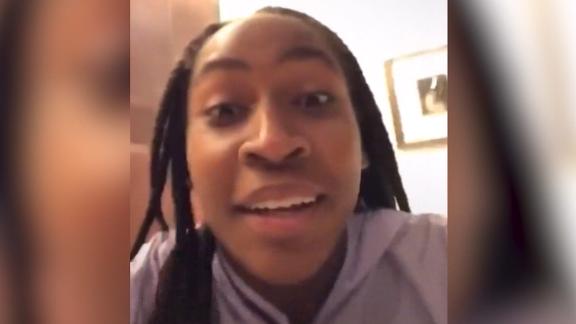 Cori "Coco' Gauff, the 15-year-old American tennis player making headlines at Wimbledon, shared her reaction on social media to celebrities like Snoop Dogg posting about her success at the tournament.

The world of Cori "Coco" Gauff -- the player taking Wimbledon by storm -- has entered a different stratosphere as she enters the second week of a grand slam for the first time.

The 15-year-old Gauff and 37-year-old Williams can not meet until the final, but until then the 23-time grand slam champion says she is "proud" of her young compatriot.

"I think she's doing everything great," Serena said. "Big fan, actually. I am so excited for her. Love her family. Gosh, I just couldn't feel more proud."

"Manic" Monday at Wimbledon features all remaining singles competitors in both the men's and women's tournaments in fourth-round action on the same day. Women's world No.1 Ash Barty takes on American Alison Riske, while Roger Federer, Rafael Nadal and Novak Djokovic also star.

All eyes, however, will be on the remarkable rise of Gauff. On Friday, Michelle Obama tweeted that Gauff was "terrific" after her remarkable comeback win against Polona Hercog, while the most successful player in tennis' Open Era -- the 15-year-old's idol Serena Williams -- even thinks she can win Wimbledon.

"I was super excited," Gauff told reporters Saturday after the former first lady tweeted about the victory over Hercog.

"She's one of my role models," added Gauff. "So it was just cool to see that she knows I exist."

Williams had spoke glowingly of Gauff before Wimbledon started -- "she is a great girl" the 23-time grand slam winner uttered last weekend -- and wasn't about to change her mind even though the teenager who has morphed from junior prodigy to star via the backroads of qualifying ousted her older sister Venus in the opening round.

"I think there are some 15-year-olds, like me, who wouldn't know what to do at Wimbledon," Serena told reporters after reaching the fourth round with her most dominant display of the fortnight so far, a 6-3 6-4 win over Julia Goerges in a repeat of last year's semifinal. "Then you have a 15-year-old like Coco who knows what to do."

Asked if Gauff could "win Wimbledon here," Serena replied: "I think she's definitely on a different level, so I think she's totally capable and ready, to be honest."

READ: Kyrgios on Nadal -- 'We wouldn't go to the pub for a drink'

Speaking of that family, mom Candi's celebrations in her daughter's heart stopping win against Hercog on Friday quickly spread on social media.

Gauff saved two match points, with all but a few of the 15,000 assembled on Center Court roaring her on. The contest shifted in Gauff's favor when she won the second set after one of the rallies of the year.

Mom's joy in the player box was also witnessed by those on Henman Hill, since Gauff's rally against the Slovenian was shown on the big screen.

Later Candi and husband Corey were busy posing for pictures for spectators near the players' locker rooms.

Gauff -- the youngest player to go this deep at Wimbledon since a 15-year-old Jennifer Capriati advanced to the last four in 1991 -- is understandably still the most popular member of the family and tennis great Martina Navratilova feels she is bound to become even more so.

"I have a feeling Coco Gauff will transcend the game," the record nine-time Wimbledon singles champion told the BBC. "She wants it, she lives it already. She was born to do this.

"I don't think I've seen anyone arrive in a greater flash at their first major."

But when they arrived for Wimbledon qualifying after Gauff lost to 18-year-old Kaja Juvan in the second round of qualifying at the French Open, dad Corey said -- as hard as it is to believe given what's happened this week -- he just wanted his daughter to win one match to justify the wildcard she received.

"I thought we'd be home celebrating the fourth of July," said the former Georgia State basketball guard. "When she plays Simona, that's going to be her seventh match in the two weeks, but I'm happy.

Gauff seems to be taking everything in her stride, aligning with a word she has used to describe herself, "calm."

She has however gotten a little starstruck after Beyonce's mom posted her on Instagram and other celebrities sent her direct messages on social media.

Despite her high-profile, continued participation in singles, Gauff stuck to her routines on Saturday.

She played in the mixed doubles competition headlined by Serena Williams and Andy Murray but tasted defeat for the first time at Wimbledon playing alongside Britain's Jay Clarke. They fell Saturday to 2017 French Open champion Jelena Ostapenko and Robert Lindstedt 6-1 6-4 on the still big Court 2.

"I was able to hit a couple of good serves, got my serve back on track," said Gauff. "Practice some returns against the big-guy serve. I think it will help me in the match on Monday."