What Kamala Harris and AOC can't make Joe Biden do 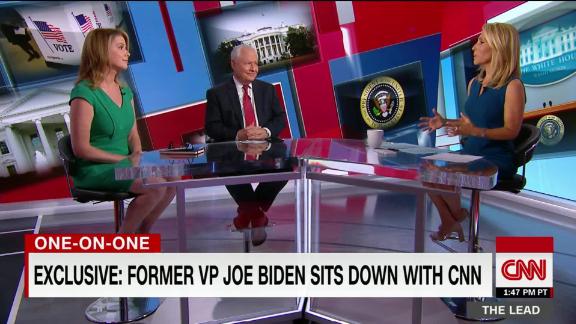 Anyone expecting to see a major reboot in the Biden campaign or a Joe Biden 2.0 just doesn't know the former vice president. He knows what he knows, which isn't everything, and is not likely to refashion his image based on a poll or a debate performance.

But the fact that he sat down for an extended interview with CNN's Chris Cuomo does indicate that Biden and his team recognize they need to do some things differently. First, Biden has to get out on the campaign trail more, something he accomplished over the past few days in Iowa. Second, he needs to be more accessible to the media, which help shape the view of many Democratic voters in the early voting states. In short, he needs to not look like the nomination is his to lose, but instead his to win.

Finally, he needs a better pushback to the kinds of charges directed at him in the Democratic presidential xebate by Sen. Kamala Harris. Here was one of the more interesting parts of the Cuomo interview. Biden made clear he was surprised not by the attack, but by the way Harris delivered it, in such a personal way. He implicitly charged Harris with a bit of demagoguery — that she criticized his position while holding essentially the same position herself. But he visibly pulled back from elaborating, saying he is determined to stay above what he calls the scrum.

Is this a good strategy? Can he survive in a modern campaign while not going personally after other Democrats? That remains to be seen. What's not in doubt is he's not likely to change his views.

The rest of the interview was a much clearer expression of how he intends to run this race and where he stands on the issues. Apart from his own personal philosophy and ideology, I know Biden will not lurch to the left to be nominated. He doesn't believe that's where Democratic voters are. He smartly cited the 2018 midterm results. While much of the media focused on Alexandria Ocasio Cortez' victory, Biden's team was watching Abigail Spanberger, a former CIA operative who upset Republican Dave Brat in Virginia's 7th District, which has been reliably Republican for decades.

The Democratic victory in 2018 was the result of center-left Democrats winning against more left-wing opponents in primaries. According to the Third Way think tank, 33 of the 40 Democrats who won in swing districts defeated someone on their left on primary day.

Biden also doesn't want to do anything that will open himself up to Trump-style attacks on election day in November. That's why he'll stick with his version of Medicare for those who want it rather than Medicare for All. Again, from Third Way, no Democratic candidate in a swing district ran an ad touting Medicare for All.

As Ron Brownstein rightly pointed out Friday, Biden is the only top-tier candidate who is for preserving the private insurance market for those who have it and want to keep it. Biden's team believes that is a key element in winning or losing the health care debate next fall.

He also made the point that he believes our system of political asylum works if it is properly administered, following both humane practices and the law. That puts him at odds with many of the candidates running against him and some Democratic party voters. But Biden is betting that a plan to reform immigration policy is both the better approach and inoculates the party from charges that it is for open borders.

On style, this interview was a very good performance by Biden. Make no mistake, he's no Obama or Clinton. His strength is his passion, not his performance skills, so don't expect major changes there.

In the end, some of Biden's tactics will change as the campaign moves forward, but his strategy won't. The voters will decide if he's got it right.