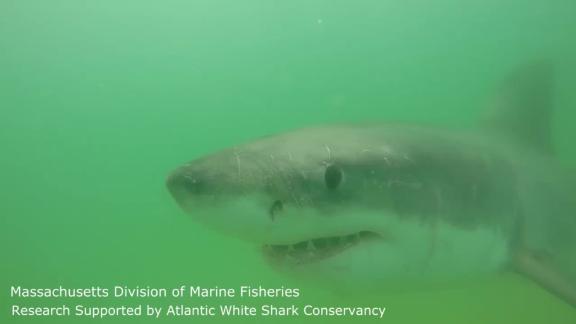 This video shows a curious shark swimming near the GoPro of researchers on a research trip near Cape Cod, Massachusetts.

Some fin is in the water in Cape Cod, Massachusetts.

Locals are bracing for an influx of tourists to flock to Cape Cod for the Fourth of July weekend, and they may have a few extra visitors joining them in the water.

According to the Florida Museum's 2018 International Shark Attack File, there were 130 incidents of shark-human interactions last year. Of those 130 incidents, 66 were confirmed to be unprovoked shark attacks with four total fatalities. The odds of being killed by a shark is 1 in 3,748,067, and there is a higher risk of being killed by fireworks, lightning, stroke or heart disease.

Even so, beachgoers must be cautious when entering the waters in Cape Cod Bay.

In order to protect beachgoers, more landlines have been added to combat poor cell service. There are also shark warning signs and beachside emergency boxes that contain a tourniquet, eye protection, gloves and trauma dressings.