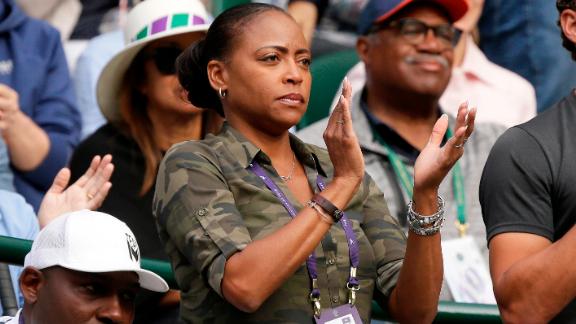 Cori "Coco" Gauff's mother, Candi, describes her reaction when Gauff beat her idol, Venus Williams, in a match at Wimbledon.

Maria Sharapova retired for the first time in her grand slam career at Wimbledon but suggested she isn't about to quit the game for good after a series of demoralizing injuries.

Sharapova stopped with a left forearm issue while trailing France's Pauline Parmentier 6-4 6-7 (4-7) 0-5 in the first round after initially leading by a set and 5-2.

"I think the easy way would be just for me to maybe do other things because I've set up the opportunities for myself," said Sharapova, who made her breakthrough by winning Wimbledon in 2004.

"This is far from easy. I've never taken the easy route. I've always worked, committed, focused. These moments are hard, but I love what I do. I still have a lot of passion for it."

The five-time grand slam winner received treatment from the trainer but couldn't continue a year after she also lost from holding a set and 5-2 advantage on the same court -- Court 2 -- against fellow Russian Vitalia Diatchenko.

Sharapova's outside interests include candy company Sugarpova and she was long the richest female athlete in the world but has always spoken of her fondness for the sport and competing.

But the season has been difficult on the health front.

Sharapova underwent a surgical procedure to her right shoulder early in 2019 -- a decade ago she suffered a career-threatening shoulder injury -- which kept her sidelined for roughly four and a half months.

Upon her return last month, she lost to last year's Wimbledon champion Angelique Kerber in the second round in Mallorca.

One injury setback after another

Wimbledon was the second occasion in her mere five events this year that the 32-year-old was forced to quit, a thigh injury preventing her from finishing a quarterfinal against Aryna Sabalenka in Shenzhen at the start of the campaign.

The limited activity has seen her ranking slide to 80th.

She had shut down her 2018 season after the US Open to rehabilitate the shoulder and dealt with left arm and thigh problems a year earlier when making her comeback to the tour following an 18-month drug suspension.

The comeback certainly hasn't been what she'd envisaged or hoped for although the signs were promising when she ousted defending champion Caroline Wozniacki at the Australian Open.

Sharapova found it difficult to strike backhands in the latter stages against the 88th-ranked Parmentier, a Frenchwoman who had lost six straight Wimbledon encounters, and said she had already had a scan on the injury.

"I've had a history of a tendon in my left forearm flaring up," said Sharapova. "It happened today in the second set.

"It's very rare that I withdraw from a match in the middle of the match. That certainly means that it's painful."

Parmentier will now face 30th-seed Carla Suarez Navarro in the second round.

The Spaniard was the player who ended Sharapova's 2018 term, winning their fourth-round contest in New York.