Coco Gauff, 15, beats Venus Williams at Wimbledon and declares: I want to be the greatest 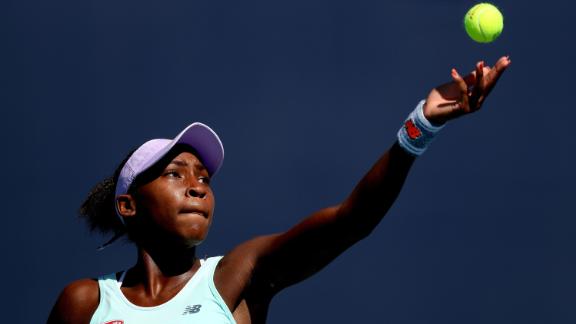 Cori "Coco" Gauff tells CNN's Christina Macfarlane about how she grew up idolizing the Williams sisters: Venus and Serena.

Youth took center stage at Wimbledon on the opening day -- yet it was the youngest of them all who bettered three others tipped for longer stays at tennis' oldest grand slam.

Cori "Coco" Gauff played with a composure well above her 15 years in ousting one of her idols, the 39-year-old Venus Williams, 6-4 6-4 in her first grand slam match and then declared: "I want to be the greatest."

"Obviously I'm super shocked," she added to reporters. "I literally got my dream draw, so I'm just super happy I was able to pull it out today."

While there were tears of joy for Gauff, Osaka's post-match press conference was cut short after the 21-year-old asked: "Can I leave? I feel like I am going to cry."

Her second straight loss came against the same foe -- Yulia Putintseva, who has a losing record at Wimbledon -- while the 20-year-old Tsitsipas fell to an opponent ranked outside the top 100 last week and who he crushed at SW19 a year ago, Thomas Fabbiano.

The 22-year-old Zverev, meanwhile, was sent packing by qualifier Jiri Vesely despite claiming the first set.

Gauff benefited from a wildcard into Wimbledon qualifying and straight away beat top-seed Aliona Bolsova.

Youngest ever to qualify

When she won her next two tussles -- also in straight sets -- Gauff became the youngest player ever to make the main draw as a qualifier.

That Gauff received a wildcard into qualifying likely stemmed from her prolific junior career. She achieved the No. 1 ranking and as a 13-year-old was the youngest ever US Open junior finalist.

No wonder Roger Federer's management company Team 8 wanted to sign her -- and did. She is also aligned with Patrick Mouratoglou, who coaches Williams' younger sister, Serena. Gauff trains at Mouratoglou's academy near Nice, France.

Gauff, who took a science test during Wimbledon's qualifying week, is dreaming big this fortnight and overall sees no reason not to.

"My goal is to win it," she said. "I think people just kind of limit themselves too much," she added in another part of her press conference.

"Once you actually get your goal, then it's like what do you do now? I like to shoot really high. So that way I always have many goals along the road, but that way you have the ultimate goal."

Williams not pleased with her own game

Williams said the "sky was the limit" for Gauff -- but the five-time tournament winner also stressed this wasn't her best outing. It was confirmed by the numbers -- 22 unforced errors and 12 winners.

"She played so well. Even all the shank balls went in," said Williams, who suffered her third opening-round exit at Wimbledon in three decades. "I actually didn't play well. It was a contrast.

"She put the ball in the court, which was much better than I did."

Osaka struck 38 unforced errors in exiting to Putintseva 7-6 (7-4) 6-2 after hitting 37 in a defeat to the Kazakh last month in Birmingham that contributed to the Japanese baseliner losing the No. 1 ranking.

She claimed cutting ties with coach Sascha Bajin after winning the Australian Open in January wasn't the reason for a downturn.

So what is it, then?

"I mean, the key for me was just, like, having fun, I guess, like learning how to have fun, kind of taking pressure off myself," Osaka said. "I hope I can somehow find a way to do that."

Returning to hard courts after Wimbledon will help, given Osaka's three biggest titles -- the US Open, Australian Open and Indian Wells -- have all come on that surface.

Tsitsipas flourished on hard courts in Australia too, defeating Federer on the way to the semifinals. Then he even topped the king of clay, Rafael Nadal, in Madrid in May.

But grass, where footing is less secure, hasn't been as kind to Greece's best-ever player already.

"I was very mad with myself yesterday," he said. "I did something that I usually never do on the court. I stepped on my racket, which made me feel horrible.

"But I already felt that I was actually not playing very well yesterday in practice, so I was kind of curious to see how this is going to change today. But it didn't."

Nor did Zverev's fortunes at grand slams change.

Sandwiched between a quarterfinal at the French Open have been fourth-round and first-round defeats at majors this year.

"In the last two days, I would say are very rough for me personally," Zverev said. "I'm not going to get into details, but I'm just saying."

He was, though, honest enough to admit there is clearly an issue playing at the grand slams, tennis' most prestigious events.

"It was kind of a typical grand slam match for me," he said. "I started off well, then one or two things don't go my way, and everything kind of a little bit falls apart."