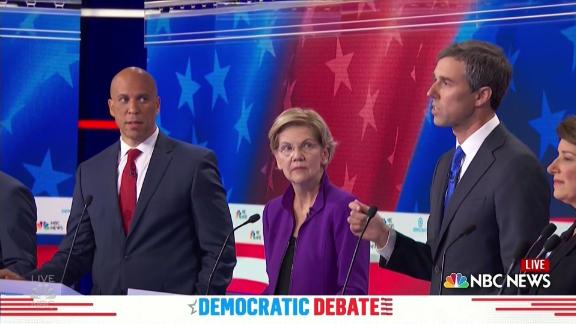 Like human heroes, some dogs run into burning buildings. Science says there's a good reason for that.

The stage was full last night in Miami as the first Democratic debate of the 2020 race kicked off. Ten candidates, many of them polling in single digits, did their best to break through and differentiate themselves. Elizabeth Warren, surging in the polls, seemed to be the center of attention, and her ideas -- on everything from health care to the economy -- dominated the early part of the debate. Julian Castro was the night's surprise, CNN's Maeve Reston wrote. He gave an impassioned argument about immigration and went hard after Beto O'Rourke.

President Trump's name was mentioned a few times. His reaction to the debate (as he headed to Japan for the G20 summit)? "BORING!" he tweeted. Here are eight takeaways, plus a take on winners and losers, a photo gallery, a check of key facts tossed out by candidates and why so many of them spoke in Spanish. The second debate -- with Joe Biden, Bernie Sanders, Kamala Harris and seven others -- starts tonight at 9 ET. Here's how to watch.

The House and Senate are set for a border battle. The GOP-led Senate yesterday passed a $4.6 billion bill to address the migrant crisis at the Mexican border. It's slightly different from the $4.5 billion bill the Democratically led House passed Tuesday. The Senate's not taking up the House bill, and the House won't vote on the Senate bill. Republicans in the Senate feel like they're in a stronger position because their bill passed with bipartisan votes, and President Trump has indicated he might sign it. So, they are essentially daring the House to take or leave the Senate bill. Congress heads out this week for a monthlong break, so if lawmakers want to send immediate aid to migrant children in border facilities, something needs to be worked out soon. Meantime, CNN toured one of the controversial facilities yesterday. Here's what we found.

President Trump just touched down in Osaka, Japan, to meet with world leaders at the G20 summit. His most anticipated meeting is set for Saturday, when he sits down with Chinese President Xi Jinping to talk about trade. The hope is the two leaders can reach a deal that'll end the ongoing trade war. Trump will probably talk trade with India's Prime Minister, too. In a tweet a few hours ago, Trump blasted Narendra Modi for what the President called India's "unacceptable" tariffs on US goods. The situation in the Middle East -- with heightened tensions between the US and Iran -- will no doubt come up in Japan as well. After the summit, the President will stop in South Korea, where plans are being made for him to visit the Demilitarized Zone.

A California woman was killed after she was attacked by three sharks while snorkeling in the Bahamas. Jordan Lindsay was with her family yesterday when the sharks attacked. Her relatives saw the sharks coming and tried to warn her, but she didn't hear them in time. Lindsay, 21, was bitten on her arms, legs and buttocks. She was pulled from the water and taken to a hospital, where she died.

Changes to climate patterns could create a whole new world of haves and have nots. The prediction comes from a new UN report that says 120 million people could slip into poverty within the next decade because of the climate emergency. A "climate apartheid" is envisioned, where the rich pay to escape the worst effects of climate change, while the rest of the world fends for itself. And most countries aren't on track to meet their climate targets: President Trump pulled the US out of the 2015 Paris climate accord; an EU proposal to curb carbon emissions died last week; and the G20 is set to water down its climate promises during its summit in Japan.

The new trailer for the last season of "Orange Is the New Black" is out. Looks like lead character Piper Chapman is out, too.

A pair of albino alligators mated and produced 19 eggs, raising hopes at a Florida animal park for a bounty of the rare white creatures.

What happened to 'West of Westeros?'

After her Arya Stark slayed the Night King on "Game of Thrones," actress Maisie Williams gets to play another tough girl in her next role.

First there were plant-based meats. Now, Arby's is testing out vegetables made out of meat.

Those Google Maps detours aren't always right. Just ask the nearly 100 drivers who took one on the way to the Denver airport and ended up in an empty field.

The Supreme Court today is expected to issue the remaining opinions of its term, including a closely watched case regarding a possible citizenship question on the census and another on partisan gerrymandering.

"I fully support whatever decision they make, but it does worry me from a parent point of view, you know, how many barriers, hateful words, persecution, all that, and discrimination that might come."

Prince William, saying he wouldn't care if his children were gay

The temperature (in degrees Fahrenheit) yesterday in Germany. That's the highest temperature on record in June in the country. Much of Europe is sweating this week through a major heat wave.