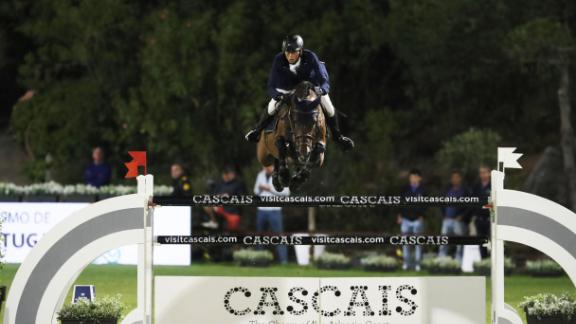 Swiss showjumper Martin Fuchs did the double in Cascais, winning both the Longines Global Champions Tour Grand Prix and the GCL with London Knights.

Martin Fuchs kept cool under pressure as he clinched the Cascais leg of the Longines Global Champions Tour (LGCT) for the world's top show jumpers.

The Swiss rider and his horse, Chaplin, won an 11-rider jump-off in a clear round of 37.64 seconds in the vast, grassy arena of the Hipódromo Manuel Possolo in Cascais, near Estoril in Portugal.

"I do love turf," Fuchs told LGCT television. "My horse, Chaplin, is great in the big rings, and he was amazing today again."

It was Fuchs' second victory of the season following his win in Madrid. He was watched by his family and his mother, who had been celebrating her birthday.

"They made a vacation here, and I hope they are happy to see my win," said Fuchs.

Just like on the grass in Madrid last month, Fuchs earned a double victory in the coastal resort of Cascais. Earlier in the day, the Swiss rider teamed up with Maher to win the Global Champions League team event.

READ: Jessica Springsteen on the secrets of her success

Having taken the lead with a clear round in 39.56 seconds as the second rider to go in the jump-off, Irish rider Darragh Kenny and Important de Muze watched five combinations fail to match his achievement.

Riding in eighth spot, Maher found another gear aboard Explosion W as they shaved almost 1.5 seconds off Kenny's time in a lightning quick round.

Could Maher, who dominated the LGCT last year with four victories, finally score his first win of 2019?

Although Ireland's Michael Duffy was faster than Maher at the halfway point, his horse lost momentum in the second part, and they eventually finished in third place at half a second behind the Briton.

The 10th rider, Marcus Ehning of Germany, set the fastest time with 36.21 seconds, but his horse dropped a pole.

Riding last, Fuchs went for broke, and he kissed his riding hat as he beat his team mate Maher by 0.45 seconds.

"I saw Ben go, so I knew a bit what I had to do," said Fuchs. "I turned very short for the double, and then to the last fence, I could just keep cantering. I think Chaplin is just a very quick horse, and so is Explosion, but today, the luck was on my side."

With Fuchs already guaranteed a spot, Maher became the ninth rider to qualify for the season-ending GC Prague Playoffs November 21-24, which will see all individual LGCT winners battle it out in the season finale.

Although he finished in ninth place in Cascais, Belgian Pieter Devos climbed to the top of the overall rankings with 206 points after nine of 19 LGCT legs. Germany's Daniel Deusser, the previous leader, dropped to second as he wasn't competing in Portugal. Maher, a six-time LGCT winner, moved up into third, with 187 points.

READ: Danielle Goldstein on the secrets of her success

The London Knights soared to the top of the overall leaderboard of the Global Champions League team event with their third win of the season.

After victories in Madrid last month and Stockholm last week, Maher and Fuchs brought home the third trophy of the season for the Knights with two error-free rounds each over two days.

"We have had a great season, we had a few weeks where it didn't go the way we wanted, but we've got momentum now," said Maher, who also rode his trusted gelding Explosion W in the team event. "We tried hard...between last week and this week, hopefully, this is the change in our season."

The Knights now lead the overall standings with 172 points, two points clear of previous leaders Shanghai Swans and 10 points ahead of Madrid in Motion.

The first to go of the four teams on clear after the first round, Maher and Fuchs decided to go for it on the closing day of the competition.

"We both have very good and quick horses," said Fuchs, who competed with Chica B Z in the first round and Chaplin in the second round. "So we were saying, we put the pressure on the other ones, we want to be fast and clear, and it turned out that way."

A tactical change beforehand had made all the difference.

"I changed the order of the way we went today," said Maher, who was more than two seconds slower than his team mate in the second round. "I thought Explosion, initially, he was overjumping a little bit, so I knew I would perhaps be a little bit slower than Martin today. I took the inside turns, I didn't take too much of a risk. That was a bit the game plan when Martin went second today, we put enough pressure on the other guys to force some mistakes."

When asked about the team lineup for Monaco, the next stop on the Global Champions Tour on 29 June, Maher said: "We will have a little bit of a change up for riders and horses next week," before adding: "You will have to wait for next week."