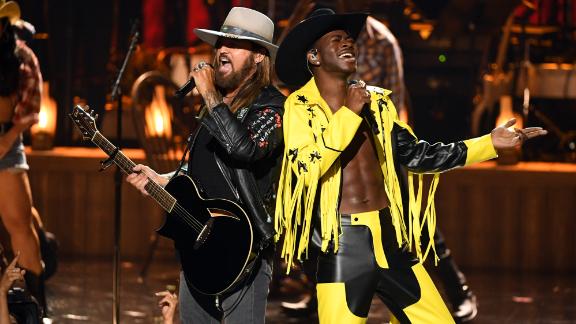 Nipsey Hussle received both a posthumous humanitarian award and an emotional tribute at Sunday night's BET Awards, but it wasn't his only honor.

The rapper, who was gunned down March 31 in Los Angeles near a clothing store he owned, was also awarded best male hip-hop artist.

But that accolade, along with a few others, was not aired on television.

BET Awards both entertained and moved

Los Angeles Times music writer Gerrick D. Kennedy noted that despite having a few of the best female hip-hop artist nominees in attendance at the live awards ceremony, that category was also not presented on air.

"Cardi/Lizzo/Megan/Kash Doll were all at the show," Kennedy tweeted. "In a year in which female rap was the most competitive its been in YEARS, to not give it out on air is insane."

Video of the year, best group, best collaboration, the best R&B categories and the BET Her award also were not presented on air.

Hussle's family accepted his humanitarian award, which was given for his work as a community activist and entrepreneur in his Los Angeles Crenshaw neighborhood.

His mother, Angelique Smith, talked about learning of her son's death and the spirituality of it all, while his father, Dawit Asghedom, thanked BET.

"I wish my son could be here," Asghedom said. "Thank you BET. He wanted to be here so badly, and last year he made it to perform here and we were so happy for him. And you recognize him and we appreciate that."