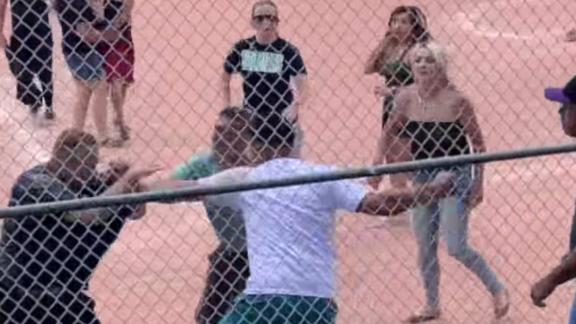 Parents and coaches were unhappy with a call made by the 13-year-old umpire during a youth baseball game, according to the Lakewood Police Department. They then stormed the field and began punching each other as the 7-year-old players looked on.

He was 11 at the time, a good-glove, no-hit middle infielder for the Dodgers with seven seasons under his belt. And as he walked from the field for the last time, equipment bag slung over his shoulder, cleats clicking off the sidewalk, I turned toward my wife and bellowed, with the glee of an intoxicated game show host, "Thank ****ing God!"

This is no exaggeration, and you can read about Emmett's baseball meanderings here. Throughout much of his time playing league ball, all I wanted was for him to stop playing. From the never-ending games to the overzealous coaches to the preposterously priced equipment to the emphasis on private swing coaches to the thug middle-of-the-order kid who thinks he's the next Bryce Harper, youth baseball is too often a miserable, jerk-riddled endeavor that I would no sooner wish upon my future grandchildren than I would a head filled with lice.

Worst of all? Hands down — the parents. Or, to be precise, the corrosive influence of too many parents.

In case you missed this, two days ago a fight broke out at a youth baseball game in Lakewood, Colorado, apparently after several coaches and fathers grew angry over the inconsistent calls of an umpire — who was (ahem) 13 years old. According to the Denver Post, the game between teams from Lakewood and Bear Creek featured 7-year-old players.

A video showed a man in teal shorts throwing a Mike Tyson-esque roundhouse to the skull of someone who was looking in the opposite direction. (Police are still looking for the teal-shorts assailant.) The recipient of the blow dropped to the dirt, his head cradled by another adult. "What is happening?" one woman is overheard saying. "What is happening? This cannot happen."

Sadly, such stories of "role-model" parents losing control as their children look on are nothing new. There was this dandy encounter, for example. And this dandy one. There are more.

Hell, I have seen it all up close. Not this violent, but similarly jarring levels of insanity and irrationality. Emmett was about 9 the first time a parent arrived at one of his games with a radar gun to clock her son's pitching velocity. He was also 9 when we were first told that, if he wants to continue on the baseball path, he'd need to set aside other sports and focus entirely on improving his bat speed.

I was at a contest when an opposing coach — mid-plate appearance — asked that Emmett's bat be checked, for fear that it was a quarter inch too wide (I should mention that my son was 10 and a .125 hitter whose primary focus was the promised post-game Slurpee).

Why, just a few days ago a friend of ours — a mother of three, baseball lifer — sat at our kitchen table, sobbing. She'd been involved in a conflict within the local Little League system. Her husband — a longtime youth baseball volunteer with a sterling reputation for kindness and decency — had been tabbed to manage the league's All-Star team, but thanks to internal politics and a good dose of backstabbing, was denied the opportunity. What followed was an ugly buffet of nasty e-mails and unnecessary slights and ruthless dishonesty, all among adults, in the name of ... kids playing a sport?

But, truly, that's what it's come to in 2019. We try to fool ourselves; to talk of lessons learned about teamwork and camaraderie and persistence. We tell our sons and daughters that baseball builds character, and time on the field will result in a better human. We offer up the 55-year-old Little League pledge ("I trust in God/I love my country/And I will respect its laws/I will play fair/And strive to win/But win or lose/I will always do my best"), pretending all the while that its outdated ethos still applies.

Then we watch as a bunch of idiot adults beat the snot out of one another.

And we're reminded of the harsh truth that organized youth baseball, a sliver of Americana once equated with the flag and apple pie, has been largely corrupted. I'm thinking, forever.

What to do? Go old school. Find some neighborhood kids, grab some gloves, bats and ball, drop 'em off at the nearby park. Then take the best step you can as a parent. Leave.