Kelly Ripa and Mark Consuelos need to lock their door 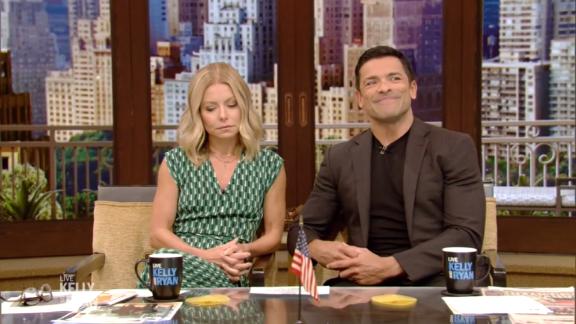 Listen to Kelly Ripa and Mark Consuelos share what happened after their teen daughter entered their bedroom without knocking.

Kelly Ripa and Mark Consuelos had the kid in some of us cringing after they shared a personal story Monday on "Live With Kelly and Ryan."

Turns out that Father's Day was also their daughter Lola's 18th birthday, and the teen walked in on her parents as they were ... celebrating.

According to the couple, the late-morning delight did not go over well with Lola.

"She shuts the door and you hear, 'You just ruined my birthday and my life and I used to see in color and now everything is gray,' " Ripa said.

The talk-show host said she already wasn't exactly in the mood, given they had a house full of people, including her in-laws, for the weekend.

The parents said that at the family brunch Lola let it be known, "You're disgusting."

It's hardly the first time her parents have embarrassed Lola.

Consuelos kicked off the most recent story, saying, "It happened again."

In March Ripa, 48, posted a "flashback Friday" throwback photo of her and Consuelos, 48, with her hubby's hands resting low on her body.

Lola responded in the comments, "Is the caption necessary" with a face-palm emoji.

That same month Ripa posted a video of Consuelos pretending to look for his phone as he lifts his shirt to reveal his rock-hard abs.

"I'm reporting this," Lola wrote in the comments.

Ripa and Consuelos are also the parents of sons Michael, 22, and Joaquin, 16.

CNN has reached out to the couple for comment.