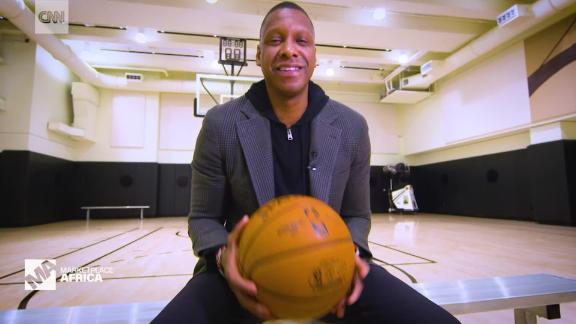 Masai Ujiri, President, Toronto Raptors says that Africa is a gold mine for talent.

There are conflicting accounts about the Thursday night's altercation between Toronto Raptors President Masai Ujiri and a sheriff's deputy after Ujiri's team defeated the Golden State Warriors to win the NBA Finals.

The Alameda County Sheriff's Office said Ujiri pushed and hit the deputy in the face, but Greg Wiener, a Warriors fan and witness to the altercation, says the entire incident was "blown out of proportion."

As the Raptors players celebrated their victory at Oracle Arena in Oakland, Ujiri attempted to go onto the basketball court without showing his credentials when asked by a deputy, said Ray Kelly, the sheriff's office spokesman.

Ujiri pushed the deputy out of the way and got on the court, Kelly said.

The deputy tried to stop Ujiri by pushing him backward off the court, Kelly said. Ujiri then pushed the deputy a second time, with part of his arm or elbow coming into contact with the deputy's face, the spokesman said.

Wiener, however, says he was standing to the right of the deputy when he saw Ujiri trying to get on the court at the end of the game.

"He didn't hit him in the face, he shoved him in the chest," Wiener said. "He was excited his team just won, he wanted to get on the court."

Wiener says Ujiri's credentials were in his hands and not clearly visible to the deputy when he tried to go onto the court. The deputy stopped him and Ujiri stepped back, before trying to go forward again. When Ujiri was stopped by the deputy again, Wiener said Ujiri pushed the deputy in the chest with two hands.

The whole incident was very quick, Wiener said, about 25 seconds or less. He plans to make a statement to Oakland police next week.

A Raptors spokesperson told CNN Sports on Friday, "The incident is being looked at, and we are cooperating with authorities. We look forward to resolving the situation."

Kelly said the sheriff's office is working with the Oakland Police Department to compile witness statements and videos. It will submit evidence to the district attorney's office for a possible charge of battery on an officer, he said.

Kelly said it wasn't an intentional punch, but the strike landed on the deputy's jaw and he complained of pain.

The deputy was not seriously injured, according to Kelly, and he was treated and released at an area hospital.

The matter is currently under investigation, according to Alameda County District Attorney spokeswoman Teresa Drenick.

"My understanding is that the matter will be submitted to our office for review and consideration of charging sometime next week," Drenick said.

Thursday's incident is not the first time a team official made a scene at the finals.

In Game 3 on June 5, Raptors point guard Kyle Lowry went into the stands while going after a loose ball and was pushed by a man sitting in the front row at Oracle Arena.

The "fan" turned out to be Golden State Warriors investor Mark Stevens. The NBA fined him $500,000 and banned him from attending any team activities through the end of next season's playoffs.

The Warriors released a statement from Stevens last week apologizing.

"I take full responsibility for my actions ... and am embarrassed by what transpired," he said. "What I did was wrong and there is no excuse for it. Mr. Lowry deserves better, and I have reached out today in an attempt to directly apologize to him and other members of the Raptors and Warriors organizations."