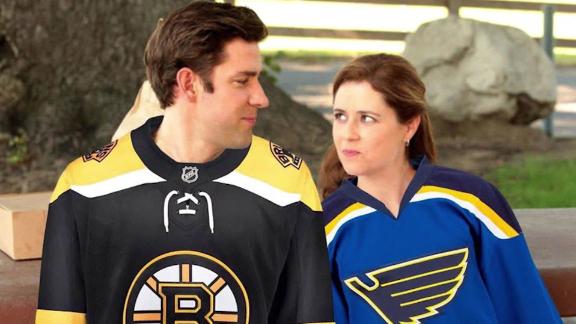 "The Office" cast members John Krasinski and Jenna Fischer troll each other on social media leading up to the St. Louis Blues Stanley Cup victory.

John Krasinski expertly trolled his former co-star Jenna Fischer at Game 7 of the Stanley Cup when he revealed his plus one was actor David Denman, known to fans of "The Office" as Pam's ex-fiancé Roy.

"Jenna Fischer, I know we've been having our ups and downs recently," Krasinski said in a video posted to Twitter. "I just wanted to say I'm really sorry you're not here."

He gestured to the seat next to him, wishing she could be there when Denman sat down.

"This is Jenna by the way," Krasinski said. Denman gave a flat "Oh...hey" and sipped his beer.

Krasinski and Fischer, who played Jim Halpert and Pam Beesly on the long running series, have been have been trading jabs on Twitter, rooting for opposing teams in the Stanley Cup.

Krasinski, from Boston, has been pulling for the Boston Bruins to win, while Fischer has been rooting for the St. Louis Blues.

Despite Krasinski's move, Fischer got the last laugh when the St. Louis Blues won the cup. She took to Twitter to write, "Ha. Ha. Ha. Well played. Just be careful he doesn't leave you at the game. #GoBlues"