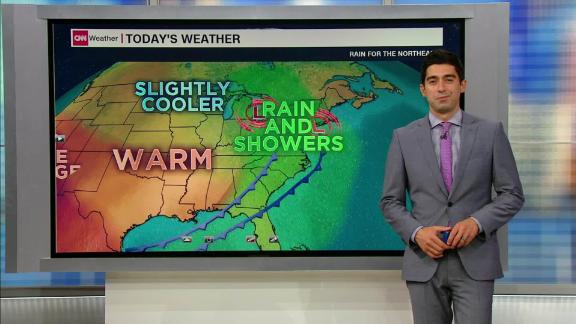 Heavy rain and patchy fog in the Northeast could cause travel delays today. Meanwhile in the West, the record heat is beginning to ease but temperatures will remain above normal. Pedram Javaheri has the forecast.

They're still partying in St. Louis, after the Blues beat the Boston Bruins 4-1 to claim the team's first Stanley Cup.

Even in the age of Trump, when we've gotten used to hearing unbelievable things, this was a stunner. The President, in an Oval Office interview with ABC News' George Stephanopoulos, said he would listen to a foreign government if it came to him with dirt on a political opponent. "I think you might want to listen," Trump said. "There isn't anything wrong with listening." Remember, the President has consistently downplayed Russian efforts to meddle in the 2016 contest and cast doubts on US intelligence agencies' assessments of it. Trump's statement also is at odds with FBI Director Christopher Wray's comment during his confirmation hearings that politicians and their operatives should report to the FBI attempts by foreign governments to interfere in US elections. Trump told ABC, "The FBI director is wrong."

Democrats pounced on the President's statements, which fanned more calls from the party for impeachment. "This is criminal. It is criminal. And we need to hold this president accountable," US Rep. Brenda Lawrence told CNN's Erin Burnett. The ever-growing gaggle of Democratic presidential candidates joined in, too, with US Sen. Kamala Harris calling Trump "a national security threat." CNN's Stephen Collinson said Trump's words risk the integrity of the 2020 vote and could even open up the election to interference from foreign spies. Republicans were largely silent.

The shooting of ex-Boston Red Sox slugger David Ortiz was a hit job. Police in the Dominican Republic said the suspects in the Sunday night shooting were paid $7,800. Six people are in custody and one more remains at large. One person has been charged with being an accomplice to attempted murder. Police haven't offered a theory yet on why anyone would want to kill Ortiz. He's in Boston recovering from the wounds left after he was struck by a bullet that went through his stomach. His wife said he was able to sit up yesterday in the hospital and walk a few steps.

Uranium mining around the Grand Canyon? Environmentalists worry it could happen and pollute the region's groundwater supply. Still, federal officials may rule next month on a petition that could lead to uranium mining near the Grand Canyon. Back in 2012, the Interior Department blocked mining on more than 1 million acres near the national park for 20 years. But a mining company has petitioned to change that. Energy Fuels Resources wants to dig for uranium in the area because it says almost all the uranium the US uses comes from foreign sources. The mining company considers that a "serious crisis."

Two tankers reportedly were attacked this morning near the Strait of Hormuz. Details are still sketchy, but the captain of one of the vessels said two projectiles were fired at the ships, CNN's Nic Robertson reported, calling them missiles. Iran's navy said it rescued 44 crew members from the tankers. About 30% of the world's sea-borne crude oil passes through the strait, which links the Gulf of Oman with the Persian Gulf. US crude oil futures jumped as much as 4% on the news. This incident comes about a month after four oil tankers were attacked off the coast of the United Arab Emirates, which described it as "sabotage." Click here to keep up with the latest on this developing story.

About 6 million people could be impacted by Tropical Cyclone Vayu, which is expected to pass today near the Indian state of Gujarat. Nearly 300,000 people in northwest India have been evacuated. The storm this morning had sustained winds of 83 to 90 mph, with gusts of almost 100 mph. Officials are concerned about the storm surge Vayu could produce, possibly as high as 6.5 feet, so they're telling people to stay away from the coast. Click here to keep up with the storm.

Police officers and protesters have clashed all night in Memphis after a man was shot and killed by the US Marshals Service on the city's north side.

Visitors to the SkyDeck ledge at Chicago's Willis Tower got a scare when glass cracked under their feet. Thankfully, it was just the attraction's protective layer.

Twenty years after "The Matrix," Keanu Reeves is hot again. "John Wick 3" is a hit, he stole the show in a Netflix movie and he's winning praise for how he takes photos with women.

Rodney Smith Jr. has visited all 50 states. Five times each. He mows lawns for people in need for free. This time, he's doing it for military veterans.

Is that supposed to be California?

It's really hard to fool a motorcycle cop with a fake license plate when you can't even spell the state's name right.

The number of years former Stanford sailing coach John Vandemoer will spend in prison in the college admissions scandal case. Vandemoer did get two years of supervised release, including six months of home confinement, and he'll have to pay a $10,000 fine. He pleaded guilty in the case for taking bribes to help get the children of wealthy parents get into Stanford.

Is there a difference between cheap and expensive sausage? This sausage expert says there is. Wait, there are sausage experts now? (Click to view.)