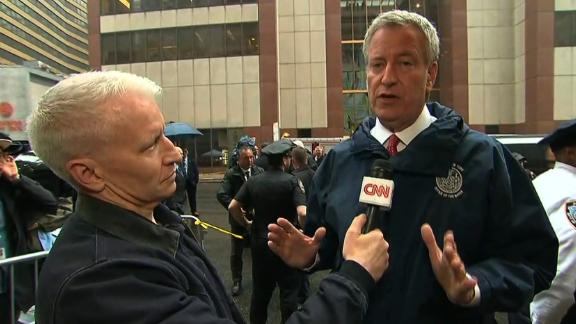 A helicopter crash Monday in Manhattan highlighted the hazards of letting helicopters fly over the densely populated area and renewed calls for more restrictions on those flights.

New York banned helicopters from landing on rooftop helipads after a disaster in 1977 involving a helicopter atop the Pan Am Building, now the Met Life Building, according to the office of US Rep. Carolyn B. Maloney, who represents the district in Congress.

State air traffic rules restrict flight over congested areas to 1,000 feet above the highest obstacle within a horizontal radius of 2,000 feet from the aircraft.

Maloney called on the Federal Aviation Administration to ban all non-essential helicopters from flying over Manhattan.

"We cannot rely on good fortune to protect people on the ground. It is past time for the FAA to ban unnecessary helicopters from the skies over our densely packed urban city. The risks to New Yorkers are just too high," she said.

Was the helicopter allowed in the area?

Officials said the helicopter took off Monday from the 34th Street heliport on Manhattan's east side around 1:30 p.m. It crashed on the roof of a 54-story building in Midtown about 11 minutes later, starting a fire that took half an hour to extinguish.

Investigators are looking into the cause of the crash, which killed pilot Tim McCormack, believed to be the sole person in the aircraft.

New York City Mayor Bill de Blasio said the aircraft should not have been in Midtown Manhattan without the approval of the La Guardia Airport Tower, in part because it's home to Trump Tower, President Trump's Manhattan residence, he said.

It's possible to apply for authorization to operate a helicopter landing outside approved heliports through a permitting process, although it's not clear if that happened in this instance.

"Something like this should have been authorized, we don't have any indication it was but we are still investigating to confirm that."

Monday's crash was the second in the city in the past month and the latest in a string of deadly incidents in recent years.

Five people died in March 2018 when a chartered helicopter crashed into the East River.

The incident led a group of lawmakers from New York and New Jersey -- including Maloney -- to voice opposition to helicopter tourism.

The deadly 2018 crash was the third involving Liberty Helicopters since 2007.

In August 2009, nine people were killed after a helicopter and a small, private plane crashed into each other over the Hudson River. The FAA said the helicopter and small plane were communicating on different radio frequencies "and were not aware of each other's positions."

Two years before that, in July 2007, a Liberty sightseeing chopper carrying eight people suffered a rotor blade separation midflight and crashed into the Hudson River.

All passengers were wearing inflatable life vests, and the pilot said she deployed pop-out floats, the National Transportation Safety Board said. Neither the pilot nor the seven passengers were seriously injured.