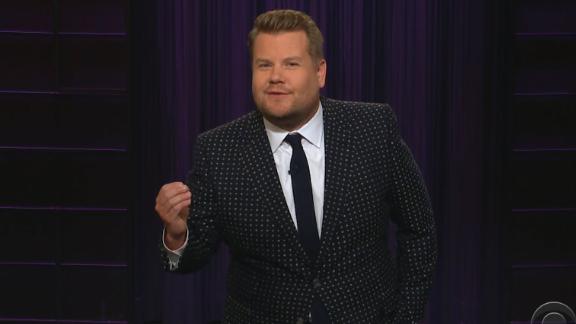 In an interview with HLN's Chloe Melas, James Corden discussed his nervousness about hosting this year's show, and why he hasn't yet renewed his contract with CBS.

James Corden may seem like an old pro when it comes to hosting awards shows, but even he gets nervous.

It's more than just a slight case of the butterflies. His performance anxiety got so bad at one point, he told CNN in an interview this week as he prepares to host the Tony Awards, that he sought professional help.

"I get nerves to an almost crippling degree," he said. "I actually went to see someone about it at one point because it was getting to a point where I was so nervous it was unmanageable.

"This is a few years ago now, and then he taught me this thing that you've got to see nerves as a good thing. You're only ever nervous when you want to do your best. You're only ever nervous when something matters. So when nerves come, you've got to go, 'Oh my God, this is great. I'm doing something that is important to me, and this is great that this thing has turned up to help me.' "

He added he does "a lot of breathing but my God, you've never seen nerves like it. It's horrific."

Corden is no stranger to the Tony Awards stage, having won the best actor award for his role in the 2012 play "One Man. Two Guvnors," and Sunday will mark his second time hosting the awards.

The Tony Award nominees were revealed, and there were some surprising snubs

When it comes to this weekend's upcoming show, he said that people definitely don't want to miss the opening number.

"We are going to open with what we think is a pretty ambitious opening number, which may be a mistake," he said. "It certainly feels like it may be a mistake right now to try and do something so big, but we are really going to try."

Among the productions, "Hadestown," starring Reeve Carney, Amber Gray and André De Shields, leads the way with 14 nominations, followed by "Ain't Too Proud" with 12 and "Tootsie" with 11.

"We are going to try and put on a show that is worthy of the incredible performers that are in that room that do it eight times a week," Corden said. "Our aim is just to celebrate them and the incredible year that they've had and try to move the show along with fun and efficiency."

As for whether he'll tackle politics, he said, "We have no real plans to get particularly political at the moment, (but) I mean we are still writing a lot of the show."

When it comes to whether he'll re-sign for his other gig, "The Late Late Show With James Corden," he said he's open to coming back. "I think we'll figure it out, I'm sure we will. ... I think so."