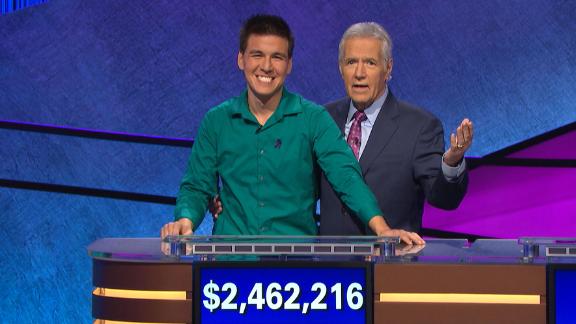 After James Holzhauer's historic "Jeopardy!" run came to an end, the internet was flooded with conspiracy theories stemming from his loss.

Congratulations to Emma Boettcher, a librarian at the University of Chicago, who unseated 31-game winner James Holzhauer, a professional gambler, and won (so far!) $46,801 on the game show 'Jeopardy!'

She plans to make a donation to the information and library science program at the University of North Carolina at Chapel Hill, where she wrote her master's thesis on Final Jeopardy questions. Then she wants to pay down her student loans.

Her win is a victory for the humanities, at least for one night. But it shouldn't take winning a game show to pay off the cost of one's education.

Boettcher won convincingly, hitting a Daily Double early in the second round. She had taken control of the board by knowing that the North American city of Beverwyck had changed its name to Albany in 1664. She stayed in the category "Capital 'A'," got the chance to double up, and bet her full sum of $7,600. She knew that Annapolis was the home to the annual United States sailboat show, took the lead, and never really looked back. Boettcher finished the round a few thousands dollars ahead and found herself looking at a Final Jeopardy question on "Shakespeare's Times." As an English major at Princeton, Boettcher had written an undergraduate thesis on Shakespeare, so confidently bet $20,000, putting her 1$ over the maximum her opponent could have won assuming they both got it right. She correctly identified that the line from As You Like It, "A great reckoning in a small room," likely referred to the mysterious murder of Christopher "Kit" Marlowe. The game show crowned a new champion.

To win against Holzhauer, Boettcher relied on a well-rounded liberal arts and sciences education. She needed knowledge from literature, foundational sciences, history, and more in order to answer her questions, all while quickly deploying her math skills to make the right wager. The math around student loans, especially when it comes to allowing people to study what they want, isn't so easy.

As CNN recently reported, about 45 million Americans collectively have $1.49 trillion dollars in student loan debt. Everyone seems to agree that the current situation is untenable; the question is what we do next. Americans generally believe that funding for higher education has increased, but in fact public investment in higher education has been declining for decades, including a $9 billion reduction over the last 10 years. The result has been a bifurcated education system, in which only students at rich institutions can study the topics that interest them most, while poorer students feel obligated to major in business. Pursuing an undergraduate business degree situated in a rich liberal arts and sciences curriculum can be wonderful, but they are not a direct path to the C-suite.

What can we do? On the left, Sen. Elizabeth Warren has proposed using a wealth tax on the massively elite (2 cents on every dollar over $50 million, 3 cents on every dollar over $1 billion) to pay off student loan debt. Meanwhile, led by Bernie Sanders in 2016, Democratic candidates for president and other lawmakers are offering competing plans to reduce or eliminate tuition for future students. The wonky details of the various plans matter, but the overall picture is clear: Democrats believe we must reset the social contract around how education is funded.

It's less certain how Republicans want to change things. In Tennessee, where I grew up, Republican lawmakers have committed themselves to free community college for all its residents. The Tennessee Promise, enacted in 2014, has boosted graduate rates across the state, grown in popularity, and even provided the evidence behind Barack Obama's nationwide proposal for free community college in 2015. Alas, that plan went nowhere in the Republican Congress and has not been taken up by the Trump administration.

Meanwhile, Trump's Education Department, under Michigan billionaire Betsy DeVos, has made life tougher for students. She's made it harder for states to regulate predatory student loan companies. She's resisted enabling debt relief for defrauded students. Her department has denied almost all applicants to a public service loan forgiveness program. She's also made it easier for for-profit colleges to prey on students. The Trump administration has been a windfall for people who want to profit off the desire to learn.

We can do better. Boettcher (and Holzhauer before her) won their contests by making smart bets based on the odds of success, knowing that sometimes you have to a risk in order to reap the rewards. It's long past time for us, as a country, to make a carefully calibrated wager on the future by investing in education and forgiving student debt. Let's go all in on education.

A day in the life of a paramedic: Riding along with Three Rivers Ambulance Authority