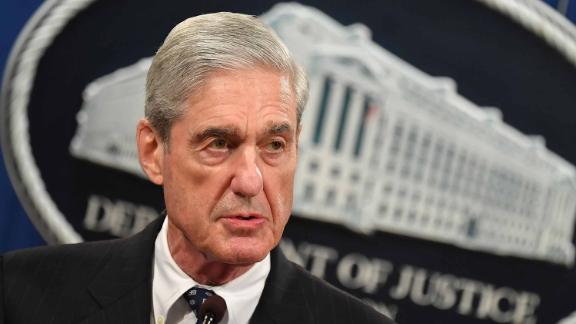 Special counsel Robert Mueller announces his resignation from the Department of Justice and offers insights into his investigation.

Robert Mueller fired a searing barrage at President Donald Trump and issued a not at all hidden message for Congress and the American people.

In a public statement -- before the cameras -- announcing the closing of the special counsel's office, which had investigated Russia's interference in the 2016 election, and his retirement from public service, Mueller chose his words carefully. He didn't offer a lot of new information, but he was very deliberate in what he selected to highlight from his 448-page report.

Reading between the lines, Mueller appeared to suggest that if he had not been shackled by Department of Justice regulations, the special counsel would have indicted the President. He said: "If we had confidence that the President clearly did not commit a crime, we would have said so."

(The White House, in keeping with its appalling practice, quickly responded with a statement, "The report was clear -- there was no conclusion, no conspiracy -- and the Department of Justice confirmed there was no obstruction.")

But on this point Mueller was cuttingly clear: His investigation did not exonerate the President.

"Under long-standing department policy," he noted, "the President cannot be charged with a federal crime."

That may be the only reason Trump was not charged. And to emphasize that lack of charges does not equal exoneration (contrary to what the President and his supporters falsely claim), he declared, "The special counsel's office is part of the Department of Justice," which meant, "it was bound by department policy." Again, he underscored, "Charging the President with a crime was therefore not an option we could consider."

Then came a message for House Speaker Nancy Pelosi and the rest of the Congress: "The Constitution requires a process other than the criminal justice system to formally accuse a sitting president."

The process, of course, is impeachment, a risky move that Democrats have hesitated to make.

Mueller stressed the danger to the system of justice, saying, "When a subject of an investigation obstructs that investigation or lies to investigators, it strikes at the core of their government's effort to find the truth and hold wrongdoers accountable." We have a strong hunch as to whom he was talking about. His report details 11 instances in which investigators probed whether Trump was purposely working to obstruct the investigation, plentiful fodder for an impeachment.

As Mueller noted, all of this is already available in his report. But most Americans -- and likely members of Congress -- have not read the two volumes. The electrifying impact of seeing and hearing Mueller for the first -- and possibly last -- time since the special counsel's office was formed will likely carry more force than the long and dense report.

Trump and Attorney General William Barr have tried to twist the investigation's findings, and to some degree they have succeeded in creating a deceptive impression. Weeks before he released a redacted version of the report in April, Barr came out with a four-page letter summarizing it and claiming that Mueller and his team had not uncovered sufficient evidence to determine obstruction of justice.

The buttoned-down Mueller, who keeps an intense but restrained demeanor, wrote a letter to Barr in late March, accusing the attorney general of creating a false impression, in his summary, of what the record found.

Now Mueller, speaking at long last to the American people, has again announced with fierce precision, that the President of the United States may have committed federal crimes, and that there is a process to prosecute a chief executive.

And he reminded us, once again, that contrary to Trump's endless equivocation, "The Russian military launched a concerted attack on our political system," trying to "damage a presidential candidate." They aimed to hurt Hillary Clinton, he made plain -- something Trump refuses to acknowledge.

Mueller's statement may not have included a lot of new information, but it was a sharp blow against Trump, and a call to arms to Congress and the American people, to defend their democracy from Russian attack and from the man sitting in the Oval Office, who may well be a criminal.

Whihala Beach to be shut down due to coronavirus fears