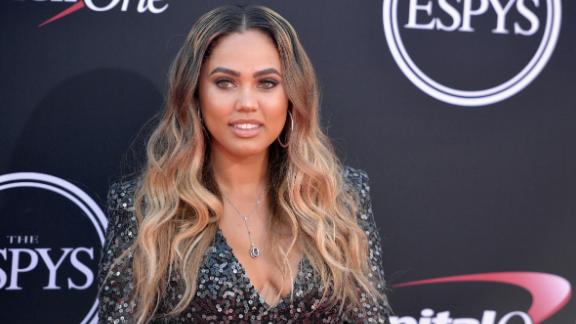 Celebrities have become somewhat used to people judging them, but Ayesha Curry was not here for it when it came to her 10-month-old son.

It all started after Curry posted a family photo in honor of the NBA's Western Conference Finals game that pitted her husband Steph Curry of the Golden State Warriors against his brother Seth Curry, who plays for the Portland Trail Blazers.

Ayesha Curry put up the picture in celebration of the family coming together to cheer the brothers on.

"Infinitely proud of these guys. Gods grace and mercy continues to cover our family and we are so grateful. Not about wins and losses, it's all about family," she wrote in the caption. "Moments like this simply put it all into perspective. 'But seek first his kingdom and his righteousness, and all these things will be given to you as well.' - Matthew 6:33."

One commentor asked whether Curry -- who shares three young children with her husband, including their 10-month-old son Canon, whom she is holding in the photo -- was pregnant again.

"Absolutely not LOL," Curry wrote back. "My 30 lb son is just breaking my back in every photo."

That prompted someone else to write in the comments: "If that kid is 30lbs he's got some serious health issues going on."

She's not the first to clap back at trolls criticizing a young child.

In March, singer Pink turned off comments on her official Instagram account after negative comments about a photo that included her 2-year-old son Jameson without his swim diaper.

"There's something seriously wrong with a lot of you out there," she wrote in the caption of the new photo. "Going off about my baby's penis? About circumcision??? Are you for real? As any normal mother at the beach, I didn't even notice he took off his swim diaper."