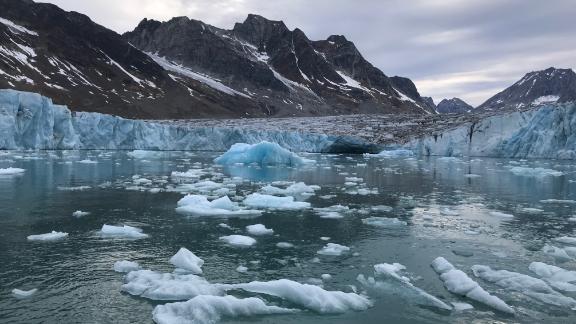 A chilling new study says global temperatures would warm more than five degrees Celsius by 2100 in a worst case, but not impossible scenario. It would lead to potentially "unthinkable" consequences, the lead author of the report, Jonathan Bamber, tells News Stream.

Global sea levels could rise more than two meters (6.6 feet) by the end of this century if emissions continue unchecked, swamping major cities such as New York and Shanghai and displacing up to 187 million people, a new study warns.

The study, which was released Monday, says sea levels may rise much faster than previously estimated due to the accelerating melting of ice sheets in both Greenland and Antarctica.

The international researchers predict that in the worst case scenario under which global temperatures increase by 5 degrees Celsius (9 degrees Fahrenheit) by 2100, sea levels could rise by more than two meters (6.6 feet) in the same period -- double the upper limit outlined by the UN climate science panel's last major report.

Such a situation would be "catastrophic," the authors of the study warn.

"It really is pretty grim," lead author Jonathan Bamber, a Professor of Physical Geography at the University of Bristol told CNN. "Two meters is not a good scenario."

He said the mass displacement of people in low-lying coastal areas would likely result in serious social upheaval. It would also pose an "existential threat" to small island nations in the Pacific which would be left pretty much uninhabitable.

The researchers found that under the extreme-case scenario, about 1.79 million square kilometers (691,120 sq miles) -- an area more than three times the size of California -- would be lost to the sea.

Such a rise would place up to 187 million people at risk, which is about 2.5% of the world's total population.

While the authors acknowledge that the chance of a worst-case scenario could be small, around 5%, they say it should not be discounted.

"Our study suggests that there is a real risk, a plausible risk of very substantial sea level rise coming from both ice sheets," Bamber said.

He added that humankind had quite a narrow window of opportunity to avoid some of the worst consequences, such as very high sea level rise.

"What we decide to do collectively as a species politically, globally, over the next decade is going to determine the future of the next generations in terms of the habitability of the planet and what sort of environment they live in."

The United Nations climate panel's last major report in 2013 predicted that sea levels would rise between 52 and 98 cm (20.4 inches and 38.5 inches) by 2100 at the current trajectory. But many experts saw those findings as conservative.

Scientists are worried that the current models used to predict the influence of massive melting ice sheets have flaws, and fail to capture all of the uncertainties.

To try to get a clearer picture, the report's authors asked 22 ice sheet experts to estimate how the Greenland and Antarctic ice sheets might respond to future climate change, using newly advanced regional- and continental-scale, process-based models.

Scientists say there is still time to avoid the worst if global greenhouse gas emissions are cut sharply in the coming decades.

The study has been published in the journal Proceedings of the US National Academy of Sciences.