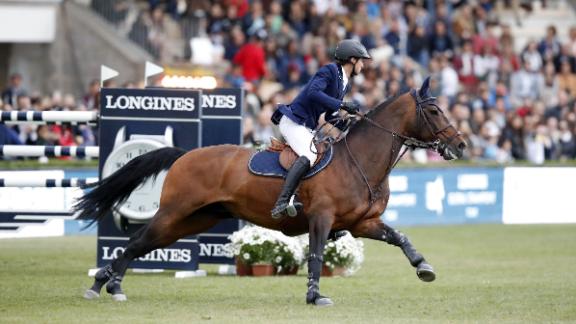 Martin Fuchs sealed a double in Madrid as the Longines Global Champions Tour for the world's top showjumpers hit Europe for the first time this season.

Martin Fuchs sealed a double victory as the Longines Global Champions Tour for the world's top showjumpers hit Europe for the first time this season with a dramatic stop in Madrid.

Earlier in the day, Fuchs teamed up with Britain's Ben Maher to win the Global Champions League team event for the London Knights.

As dusk fell on a cool evening at the vast, grassy arena of the Club de Campo Villa de Madrid country club, Shanghai winner Danielle Goldstein of Israel and her big-striding horse Lizziemary started the jump-off with a fast-paced and clear round, taking the lead with a time of 40.86 seconds.

German Marcus Ehning's horse touched a pole before Bles knocked Goldstein off the lead as he pulled out all the stops on Gin D to finish in 40.11 seconds.

The fifth rider to go, Van der Vleuten, took the lead from his countryman with a high-speed ride, finishing in 39.77 seconds as the owner of his horse, Spanish fashion retail heiress Marta Ortega, watched from the stands.

The next rider, Germany's Daniel Deusser and Calisto Blue, didn't take any risks and went clear in a time of 45.92, good enough for fifth, securing his overall ranking.

After the next three riders, Germany's Ludger Beerbaum, Sweden's Evelina Tovek and Portugal's Luciana Diniz, all failed to jump clear, the only thing standing between Van der Vleuten and a third win in Madrid were the London Knights team mates, Maher and Fuchs.

Although Maher, last year's LGCT overall champion, started off well on Explosion W, they finished with a disappointing eight penalties.

Could Fuchs spoil the party for the two Dutchmen at the top of the leaderboard as the last rider to go?

Riding into the arena to the theme tune of "Mission:Impossible" the Swiss went full throttle on his 12-year-old Dutch warmblood stallion, celebrating wildly and hugging his horse as they finished in a time of 39.49 seconds.

"I wanted to be really quick to the third vertical and to the triple bar, and then obviously the last two jumps, just used the canter of my horse," Fuchs said.

Watching from the warmup arena, Van der Vleuten's face dropped as his father patted him on the shoulder.

"It was close today," said Van der Vleuten, who moved into third on the overall leaderboard, behind Deusser and LGCT leader Pieter Devos of Belgium, who didn't compete in Madrid. "In the end, it just wasn't quick enough. But I think I must be very happy, the way she jumped today."

READ: Jessica Springsteen on growing up in a famous family and her love for horses

Fuchs' first LGCT victory earned him a spot in the lucrative season-ending GC Prague Playoffs November 21-24, which will pit the individual winners of each leg against each other in the season finale.

Staged at a record 20 venues this season, the Global Champions Tour is show jumping's richest circuit. After stops in the Middle East, Mexico, the US and Shanghai, Madrid kicked off a five-month stay in Europe, which consists of 13 events in cities including London, Rome, Saint Tropez, Monaco and Paris.

"My first time competing here, so I am definitely coming back," said Fuchs, whose uncle, Markus Fuchs, won team silver for Switzerland in the 2000 Sydney Olympics.

READ: Building a stadium on the sand at Miami Beach

The London Knights came from behind to clinch the Global Champions League for teams in Madrid for the second straight year, by the smallest of margins.

The Knights, with Maher and Fuchs, won the two-day event, which saw the top three all have double clears, as they finished 0.91 seconds faster than Britain's Scott Brash and Spencer Smith of the US, of overnight leaders New York Empire.

Madrid in Motion, the home team which fielded the Dutch father-son combination of Eric and Maikel van der Vleuten, were third, at 11.08 seconds back.

"I was very pleased to be here with my team mate Ben, who is always a great team mate and he made a double clear like he usually does," said Fuchs, who produced two error-free rounds with two different horses.

The Knights' successful title defense in Madrid pushed them into fifth place on the overall leaderboard.

"We are are very happy to be coming from behind this year so far," said Maher after going double clear with Explosion W. "We played it right today, we both went quick for the class, and we needed to. Probably one of the closest teams I can remember. Just quick enough."

The Shanghai Swans finished in fourth place as Switzerland's Pius Schwizer had a time penalty, but extended their lead in the overall standings to 109 points. The Swans, the winner of the first two legs, are 20 points clear of St Tropez Pirates in second place, and 22 points ahead of the Monaco Aces in third.

The Tour's next stop is in Hamburg, Germany from May 30-June 1.