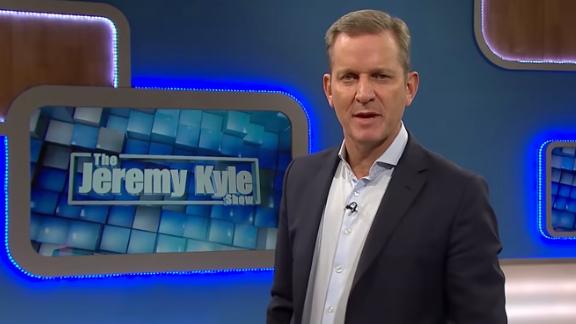 British talk show "The Jeremy Kyle Show," known for its confrontational style, has been canceled after a guest died a week after taping an episode.

A British TV company has canceled a daytime talk show known for its tabloid style and rowdy confrontations after a guest died shortly after taping an episode.

Broadcaster ITV said it has permanently canceled production of "The Jeremy Kyle Show," which had been running for 14 years.

Widely seen as the UK's answer to "The Jerry Springer Show," the Kyle show often featured feuding couples or friends accused of betrayal, with participants sometimes agreeing to lie detector tests in order to settle disputes. Results would be revealed in front of a baying studio audience, with occasionally violent consequences.

British lawmakers announced Wednesday they will open an inquiry into reality TV after the death, as well as those of two former contestants on the "Love Island" show.

UK Parliament's Digital, Culture, Media and Sport Committee will look into whether shows give participants enough support during and after filming, and whether more regulation is needed.

"The Jeremy Kyle Show" participant, who has been identified as Steve Dymond, died a week after appearing on the show, ITV said, but no cause of death was confirmed.

Emma Binning, at the ITV press office, told CNN on Wednesday that the show would be canceled "for good," and ITV CEO Carolyn McCall released a statement as a review of the long-running program continues.

"Given the gravity of recent events we have decided to end production of 'The Jeremy Kyle Show,'" said McCall.

"'The Jeremy Kyle Show' has had a loyal audience and has been made by a dedicated production team for 14 years, but now is the right time for the show to end."

"Everyone at ITV's thoughts and sympathies are with the family and friends of Steve Dymond," continued the statement.

ITV previously announced it would not screen the episode in which Dymond appeared.

The broadcaster said it will continue to work with Jeremy Kyle on other projects.