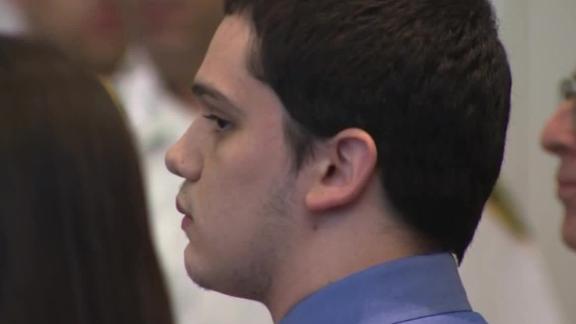 A Massachusetts teen, 18-year-old Mathew Borges, was found guilty of murder, convicted in the 2016 killing, mutilation and beheading of his classmate. CNN affiliate WBZ has the details.

A Massachusetts teen was found guilty of murder Tuesday, convicted in the killing, mutilation and beheading of his classmate.

A jury found 18-year-old Mathew Borges of Lawrence, Massachusetts, guilty of first-degree murder for the 2016 killing of then-16-year-old Lee Manuel Villoria-Paulino. Borges was 15 at the time of the murder.

"Nothing can bring Lee Paulino back to his family, who obviously love and miss him very much," Essex County District Attorney Jonathan Blodgett said in a statement Tuesday. "It is my hope that this verdict gives them some comfort and peace."

Borges' attorney, Edward Hayden, did not immediately respond to request for comment.

Paulino's body was discovered on the bank of the Merrimack River in December 2016, decapitated and missing its hands.

Sentencing is scheduled in July

In his closing arguments Monday, Assistant District Attorney Jay Gubitose said that Borges had the means, motive, and opportunity to kill Paulino.

"He had this fascination, some sort of obsession, with killing someone," Gubitose said.

The prosecution argued that Borges was jealous because Paulino had spent time with his girlfriend. Prosecutors said Borges distracted Paulino to get him out of his house while other teens robbed it, and then killed him.

CNN affiliate WCVB reported that medical examiners found 76 wounds on Paulino's body -- and that they were unable to determine whether particular wounds, including his beheading, took place before or after his death.

Since Borges was a minor when Paulino was murdered, he faces a life sentence with the possibility of parole, according to the Essex District Attorney's office.

Borges is scheduled to be sentenced on July 9.