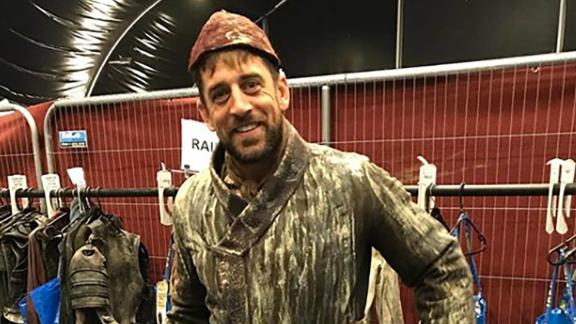 Aaron Rodgers, the star quarterback for the Green Bay Packers, is the latest celebrity to make a cameo on the "Game of Thrones" HBO series.

Especially when it comes to being obsessed with "Game of Thrones."

Aaron Rodgers, the star quarterback for the Green Bay Packers, is the latest celeb to have popped up with a cameo on the wildly popular HBO series.

Rodgers made a blink-and-you-may-have-missed-it appearance as one of the extras on the show.

"It was just for a few seconds, but I'll always be thankful to have been on the penultimate episode of @gameofthrones #crazyepisodetonight," Rodgers wrote in the caption of a photo showing him in costume.

Television sports reporter Lily Zhao posted video of Rodgers, in costume, talking about his bit part on the show.

"I was helping a woman, who was injured... then the hell with her I'm getting out of there," Rodgers said in the video.