Remembering the migrants who built the transcontinental railroad 150 years ago 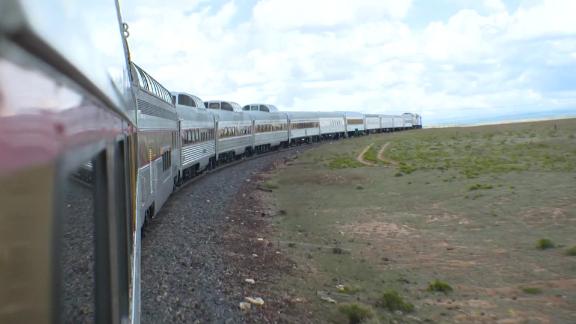 CNN's Paul Vercammen rides the rails one the Grand Canyon Railway as trains around the country mark the 150th anniversary of the Transcontinental Railroad.

Before highways, planes, trains and automobiles made crossing the United States a breeze, the completion of the transcontinental railroad in May 1869 was a defining moment in the country's history -- and immigrant labor made it possible.

Thousands of workers from a variety of ethnic and cultural backgrounds labored in grueling terrain and conditions to connect the Atlantic and Pacific. Most of them were Chinese workers who were paid less for their labor than their European counterparts.

For years, railroad workers were largely overlooked in memorial events marking the railroad's completion. This year, however, their contributions and descendents are more visible than ever in 150th anniversary celebrations.

Friday marked the sesquicentennial of the Golden Spike Ceremony on May 10, 1869, in what was then Utah Territory where the Central Pacific and Union Pacific Railroads were joined.

"The Transcontinental Railroad was a tremendous feat of engineering, innovation and manpower that was key to unleashing the economic prosperity of the United States for generations," US Secretary of Transportation Elaine Chao, whose parents are of Chinese descent, said Friday in a reenactment of the ceremony at Golden Spike National Historic Park in Promontory, Utah.

In addition to Chinese workers and Latter-Day Saints who worked for Central Pacific, Irish immigrants fleeing famine and newly freed slaves laid track across the Great Plains for the Union Pacific Railroad.

The anniversary was an occasion to commemorate "the contribution and sacrifices of the railroad workers," including the estimated 12,000-15,000 Chinese laborers "who risked everything to make the Transcontinental Railroad a reality," Chao said.

Before the transatlantic railroad, train travel was available from points east to as far as St. Louis, Missouri. Anything west of the Mississippi River required travel by wagon, a trip that could take anywhere from three to six months.

After the railroad was built, it took about seven days and as little as $65 to ride from New York to San Francisco.

"Snow fell so deeply that they had to build roofs over 37 miles of track so supply trains could make it through. The conditions were merciless, dangerous and harsh."

Yet, even after the Chinese workers reached wage parity, they still had to pay for their own housing, clothes and food, unlike other workers.

Chinese workers are said to have laid the last rails to complete the line at the Golden Spike Ceremony before dignitaries tapped four precious metal spikes into a polished tie made from California Laurelwood.

The tie bore a silver plaque that included the officers and directors of Central Pacific along with the names of the tie maker and the donor.

The spikes were symbols of the "elites" who presided over the ceremony," Stanford University history professor Gordon Chang said.

They directed attention "to the business people, political people who were prominent at the time," Chang told the Salt Lake Tribune. "And they forget about the people who actually did the work on the Central Pacific — the Chinese."

This year, however, the Chinese Railroad Workers Descendants Association and other cultural groups championed visibility of railroad workers in events and official celebrations throughout the week.

"The railroad laborers and innovators of 150 years ago helped unite our country," Chao said.