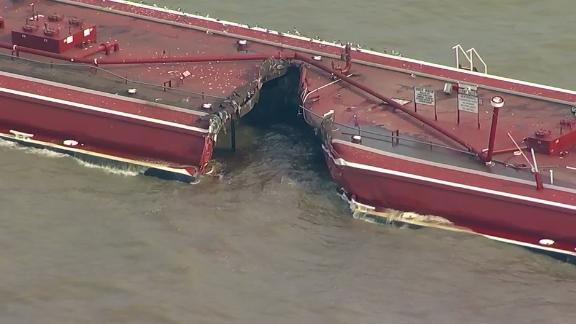 A tug pushing two barges collided with a 755-foot oil tanker in the Houston Ship Channel, capsizing one barge, damaging the other one and leaking thousands of barrels of gasoline blending stock, the US Coast Guard said.

The barges -- pushed by the towing vessel Voyager -- were loaded with the gasoline blending component Reformate, which is leaking into the water after Friday's collision near Bayport, Texas, officials said.

About 9,000 barrels of Reformate have spilled into the channel, according to incident commander Jim Guidry, an executive with Kirby Inland Marine, owner and operator of the Voyager.

There were no reported injuries during the collision with the tanker, the Genesis River.

Some 1,300 air monitoring samples from the area were under the "action level," meaning they don't pose a health risk at this point, officials said.

Coast Guard Capt. Kevin Oditt said crews were working on securing the barges, initiating salvage and recovery operations and reopening the channel. The incident is under investigation.

An estimated 25,000 barrels of gasoline blend stock were loaded on each barge, a Coast Guard statement said.

"Air monitoring is being conducted along the shoreline. ... (T)he first priority of the unified command is public safety," it said. "If any readings above actionable levels are detected, advisories will be provided to local emergency operations centers."

The Center for Toxicology and Environmental Health is monitoring nearby communities.