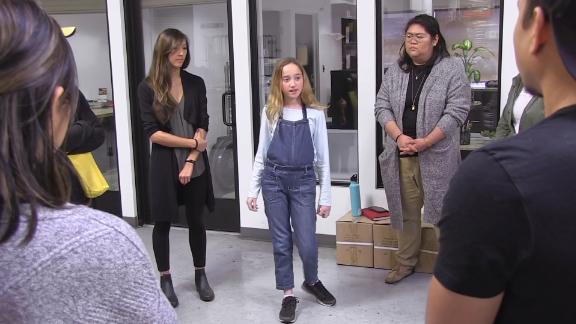 The advocacy group March for Our Lives produced this powerful video of a young student leading an active shooter training.

A group of workers gathers for a team building event in a warehouse. The topic for the team building is what to do in the event of an active shooter, and an expert has been brought in to help facilitate the training.

The expert is a school-age girl named Kayleigh.

She tells the stunned workers that if an active shooter had really walked into the warehouse, they'd all be dead. Kayleigh then recounts all the things children have been trained to do to survive a shooting.

This event isn't a real team building exercise, however, but a powerful new PSA put out by March For Our Lives, the gun control group that formed in the wake of 2018's Parkland school shooting. The PSA, titled "Generation Lockdown," seeks to build support for the passage of a bill in the US Senate that would expand background checks for guns.

As Kayleigh talks about the techniques schoolchildren have been taught to live through a shooting -- including playing a game to see who can "stay quietest the longest" -- pictures of kids crouched under tables and hiding in bathrooms flash on the screen.

She also tells the workers that they can't speak or cry during the attack because that would give away their position away to the shooter.

Kayleigh is a stand-in of sorts for the nation's children, says Matt McPartlin of the PR firm Precision Strategies, which counts March For Our Lives as a client.

"Kayleigh is a student who is representing millions of students across the country," McPartline told CNN in an email. "She is reciting safety lessons she learned in school, and pulling from similar safety drills that students face across the country."

The PSA ends with Kayleigh singing a song a teacher had taught her to make it easier to remember the tactics:

"Lockdown, lockdown, let's all hide. Lock the doors and stay inside. Crouch on down. Don't make a sound. And don't cry or you'll be found."