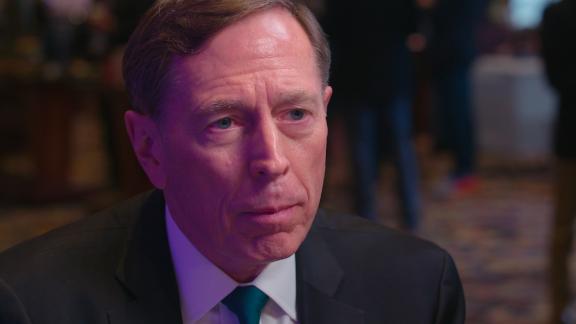 Retired US Army general and former CIA Director David Petraeus explains why the US has leverage in its trade negotiations with China but needs to close a deal quickly.

If you buy street food while visiting Kamakura, Japan, you might want to sit down and eat it. That's because this city has banned eating while walking. Here's what else you need to know to Get Up to Speed and Out the Door. (You can also get "5 Things You Need to Know Today" delivered to your inbox daily. Sign up here.)

Well now it's getting real. The Trump administration raised tariffs on $200 billion worth of Chinese imports just after midnight. The tariffs went from 10% to 25%. China promised it will hit back. US and Chinese negotiators will resume trade talks later today in Washington. US consumers haven't really felt the bite of tariffs so far, but that could change with this round because these expanded tariffs could result in a 25% tax on almost everything else the US imports from China. So that means your shoes, toys and iPhones could become more expensive. One business group estimates the 25% tariff on apparel imports alone would cost a family of four an extra $500 a year.

Chelsea Manning is out of jail -- for now. The former Army intelligence analyst had been locked up for about two months after refusing to testify to a grand jury about her disclosure of military and diplomatic secrets to WikiLeaks. Manning was released Thursday from custody in a detention center in Virginia because the grand jury has disbanded. But she could soon return to jail because she received a separate subpoena while she was detained. Her attorneys say she won't testify in response to that subpoena either.

The United States has seized a North Korean cargo ship that's suspected of being an integral part of the North's alleged sanctions violations. The ship, called the Wise Honest, hauled coal from North Korea that was sold in other countries, including China. The United States and United Nations say illicit coal sales help fund North Korea's nuclear weapons programs. The ship's seizure will only raise already heightened tensions between the two countries. US efforts to get the North to drop its nuclear program have stalled, and in less than a week North Korea launched two short-range missiles.

Were some signs of trouble missed at STEM School Highlands Ranch? A mom of a student at the suburban Denver school thinks there were. She told CNN the school -- where one student died in a shooting this week -- had a "pressure cooker" environment. She said she'd heard reports of violence, sexual assault and bullying. She also noticed that her child and others weren't getting enough sleep and seemed stressed out. So she called a county school board member, worried that a "perfect storm" was brewing "for something like a Columbine." The school disputes the allegations and has told parents that school officials had filed a defamation lawsuit against her.

Jeff Bezos is ready to go to the moon. The Amazon CEO (who also just happens to be the world's richest man) unveiled Blue Moon, a new spacecraft designed to land on the moon. It's made by Blue Origin, Bezos' secretive rocket company. He took the wraps off a new rocket engine called BE-7, too. He not only wants to go to the moon, he wants humans to be able to stay there to do work. Bezos says humanity could solve some of its biggest problems, like what he called an inevitable energy crisis, by accessing resources found in space.

You can BanX on it
If you're lucky enough to get Tyra Banks in front of the camera, make sure to refer to her by her new modeling name: BanX.

Helping hand
Meet the California diner owner who uses volunteers to help feed people who are battling chronic illnesses and are too sick to make it to her restaurant.

Beach bummer
Ready to go back to the beach made famous in the move "The Beach"? Well you're out of luck because Thailand's keeping it closed for another two years.

'Nanny' needed
Fran Drescher strongly hinted that her still-popular character from the '90s TV show "The Nanny" might be headed to Broadway.

"That's just crazy and a recipe for lawlessness."

Former FBI Director James Comey, telling Anderson Cooper during a CNN town hall that he doesn't believe that a sitting president can't ever be charged with obstruction of justice.

That's how much Uber raised in its initial public offering, one of the largest in US history.

This city became the first in the US to decriminalize hallucinogenic mushrooms.

Who needs NASA? Meet the man who built his own spacesuit. (Click to view.)