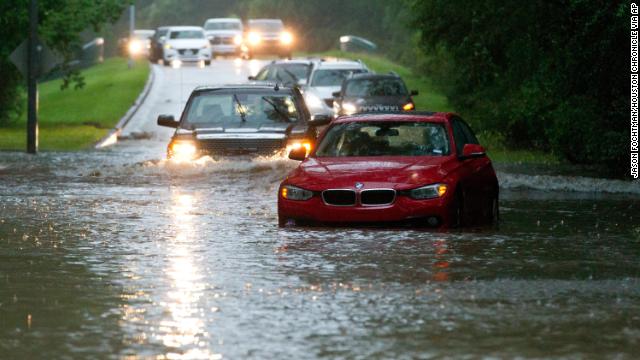 Flooding after heavy rains stranded dozens of students overnight at a school in southeast Texas as some vehicles were unable to reach campuses.

About 60 students stranded at a Texas elementary school overnight amid heavy rain and flooding are home as of Wednesday morning, a school official said.

"In Cleveland we have a lot of low-lying areas," Ard said. "We can't get buses through."

More than 100 faculty and staff members remained at the school to sleep in shifts to keep watch on the students, Ard said. A local church brought in cots so students and staff could stay the night, she added.

The students -- mostly elementary-school age -- kept busy playing cards and watching television, Ard said. School was not in session for the district Wednesday.

The flooding comes with more than 30 million people in the potential path for severe storms Wednesday from Texas north to Illinois, CNN meteorologist Dave Hennen said.

The heaviest rain over the next few days will be concentrated from southeast Texas into Louisiana and Arkansas, and by Saturday morning much of that region will see an additional 3 to 6 inches of rain and widespread flooding.

In Austin, Texas, emergency responders were called about a report of a person swept away in swiftly moving water on Wednesday. The body of a 50-year-old man was then found in Lady Bird Lake, Austin-Travis County officials said.

"As Texas prepares for another round of severe weather, including the potential for tornadoes and dangerous flooding, multiple state resources have been prepositioned for rapid deployment should local officials need assistance with search and rescue operations," Abbott in a statement.

"We are asking Texans to stay alert during this dangerous storm system and heed all warnings from local officials."

A graphic of rainfall totals for an 18-hour period Tuesday into Wednesday showed the extent of the deluge in parts of the Houston area.

There have been 250 calls for high-water rescue to the Houston Fire Department, department spokeswoman Sheldra Brigham said on Twitter. Brigham said "hundreds of homes" have been affected by the rising waters.

Another school district in the area, New Caney Independent School District, posted on Twitter Tuesday night that it was also unable to transport students home but remained open for parents to pick up their children.

The threat stretched about 35 miles west of Houston, where a Fort Bend County judge issued a disaster declaration for potential flooding from the Brazos River.

"Our residents need to understand that is a serious threat," Fort Bend County Judge KP George said. "This flash flooding tonight is contributing to the Brazos River levels, which still pose a threat later this week. We are not out of the woods yet."

As a result of the flooding, Texas EquuSearch said it is suspending the search for Maleah Davis, a 4-year-old Houston girl who has been missing since Saturday. In a statement, the organization that looks for lost and missing people said recent heavy rains could restrict the areas it had planned on searching.