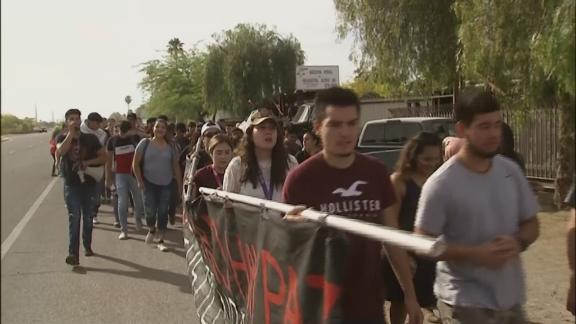 High school students in Tucson, Arizona, protested for the release of their classmate who was detained by immigration officials after a traffic stop.

The Tucson, Arizona, high schooler whose border patrol detention spurred a student walkout is back in class, but county court records show he's been ordered to appear in court May 22 -- the day he's slated to graduate.

The Pima County Sheriff's Department turned Torres-Maytorena over to federal authorities following a May 2 traffic stop, during which he was unable to produce identification and told a deputy that he was undocumented, according to the sheriff's department.

Torres-Maytorena was issued a traffic citation for "displaying a plate suspended for financial responsibility, no mandatory insurance, no valid driver's license and no current registration," according to the sheriff's department.

US Border Patrol said in a statement that Torres-Maytorena is a Mexican citizen and faces immigration charges.

On Monday, more than 100 of Torres-Maytorena's classmates walked out of Desert View High, chanting their classmate's name and marching in protest.

"We're here to get our friend back," Daphne Anselmo told her fellow students during the protest, according to video from CNN affiliate KOLD. "This shouldn't be happening right now. Thomas should be in class."