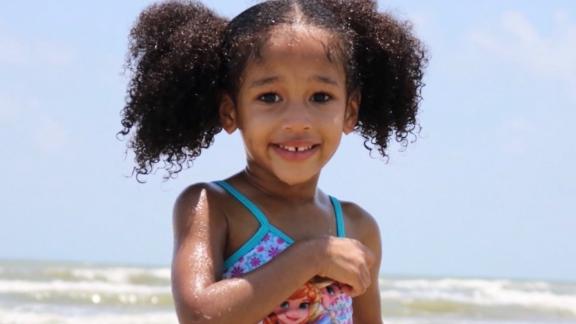 Authorities have identified the remains of 4-year-old Maleah Davis, according to the Harris County Institute of Forensic Science.

The man arrested after Maleah Davis' disappearance says "nothing bad happened" to the 4-year-old girl as her mother demands answers after she was found dead in Arkansas.

Maleah was in the care of her mother's boyfriend, Derion Vence, when she was captured on surveillance video following him into the home they all shared on April 30.

After she was missing for more than a month, human remains found in Arkansas last week were confirmed Monday to be the young girl.

Investigators have not provided details on how she died. Vence initially told officers that he was attacked by a group of men who knocked him unconscious then abducted Maleah, but police have said they do not believe his story.

In a tearful jailhouse interview with CNN affiliate KTRK on Tuesday, Vence defended himself, saying "nothing bad happened to Maleah" and "she didn't suffer."

"I would never do anything to hurt her. That's not me. Ask anyone who knows me, and they'll tell you I'm not that type of dude ... I ain't no killer, bro," he said.

Instead of sitting in jail, he said, he should be at home with Maleah, her mother, Brittany Bowens, and their children.

"I should be home with my family. With Maleah, the kids and Brittany, cooking dinner and watching Netflix," Vence said. "Nothing bad happened to Maleah."

When asked how she ended up dead, he declined to discuss it without his lawyer present, but said the truth will come out, the affiliate reported.

Bowens said she's still in shock over her daughter's death. She told the affiliate she was out of town for her father's funeral, and had left Maleah under the care of the man she was once engaged to.

"It's a numbing feeling to the point where you can't feel anything. I can say I'm sad, I'm distraught ... I can say a lot of things ... I can't explain that. Not one will amount or measure up to the way I feel," she said.

"When you are in a situation like this, you start to become numb. And what do you do when you can't feel?" she said. "I just want the truth of what happened. Not some narrative that was created by somebody else."

Vence reported Maleah missing on May 4 after he said he walked to a nearby hospital after she was kidnapped and he was unconscious for 24 hours, according to the police. But as detectives began collecting evidence, his account began to fall apart.

Video shows Vence was dropped off at the hospital in the car he claims was stolen, authorities said. Investigators collected blood from his apartment that was consistent with DNA taken from Maleah's toothbrush, court documents show.

Detectives also found signs of decay in his car and blood evidence in his apartment. They also viewed footage captured from the porch of an apartment next to Vence's, and saw Maleah entering the apartment but not coming back out.

Instead, Vence is seen leaving the apartment on May 3 carrying a large blue laundry basket with a black trash bag inside, according to the affidavit.

He returned a few minutes later and walked back out carrying cleaning supplies, including bleach, according to court documents.

He was arrested and booked into the Harris County jail in May on suspicion of tampering with a human corpse, police said.

The search for Maleah moved to Arkansas after the suspect allegedly confessed to community activist Quanell X, who visited him in jail last week. He allegedly told him that he dumped the little girl's body near Hope, about 30 miles northeast of the Texas-Arkansas border.

A roadside mowing crew spotted a garbage bag with a foul odor near Hope, authorities said. It contained the remains of the child.