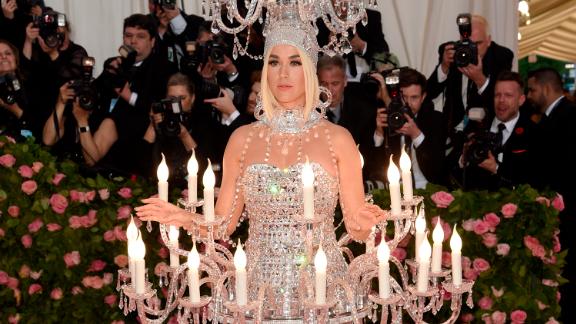 At the 2019 Met Gala, celebs dressed for the theme "Camp: Notes on Fashion" which was colorful, theatrical and almost always over-the-top.

At the very least Katie Holmes and Jamie Foxx pose well together.

The pair were side by side Monday night at the Metropolitan Museum of Art's 2019 Costume Institute Gala, and the internet took it as a signal the two were confirming their romance.

To be clear there's been buzz they have been a couple since 2013, but neither has publicly confirmed it.

Yet there they were arm in arm Monday looking coordinated in their fashion.

According to People, Holmes wore a custom Zac Posen gown, made of 300 yards of multilayered, hand-sewn colored tulle, and rocked some Lorraine Schwartz jewelry along with a Tyler Ellis clutch.

Foxx sported a black suit with a skinny tie and an eye-catching sequin panther pin and purple shoes that complemented Holmes' gown.

Hollywood coupledom is a big thing and known to launch a thousand magazine covers, but so far Holmes and Foxx have frustrated industry watchers' desires to get a hold of anything beyond some paparazzi shots of them here and there.

So Twitter was on full alert when the actors were spotted together at the ball.

The two did not appear on the media-filled carpet together but were photographed plenty with each other inside the event.

Holmes has been divorced from superstar Tom Cruise since 2012, and they share a daughter, Suri, who recently turned 13.

CNN has reached out to reps for Holmes and Foxx for comment.