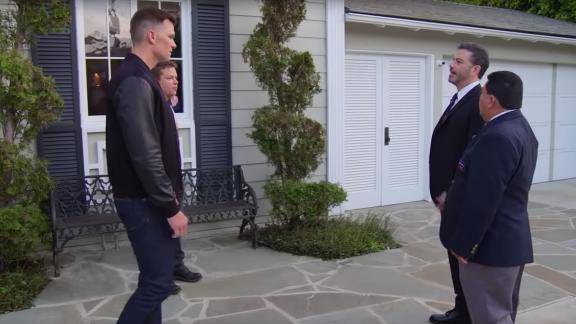 Can you imagine a window shattering in your home, then walking outside to discover NFL legend Tom Brady is the culprit?

It was the latest edition in a fictional feud between Kimmel and Damon that has played out over years on Kimmel's late-night show.

The best part -- and sheer irony -- might be that Damon, a Massachusetts native, is a mega fan of the NFL superstar.

"Oh, no, do you live here?" Kimmel says, acting surprised as Damon storms out of the house.

"You know I live here!" responds Damon, stifling laughter while wearing a T-shirt printed with the film poster for his 2011 comedy, "We Bought A Zoo."

There have been too many hilarious skits to count when it comes to their A-list feud. The actors last year attended a World Series game between the Boston Red Sox and Los Angeles Dodgers, both wearing shirts that read, "I'm With Stupid," with arrows pointing at each other.

Kimmel a year earlier hosted the Oscars and called Damon overweight and selfish.

"He handed what turned out to be an Oscar-caliber role over to his friend and made a Chinese-ponytail movie instead," Kimmel said on stage as the audience erupted with laughter. "And that movie, 'The Great Wall,' went on to lose $80 million. Smooth move, dumba**."

We're not sure how much longer this feud will continue, but it doesn't appear to be slowing down.