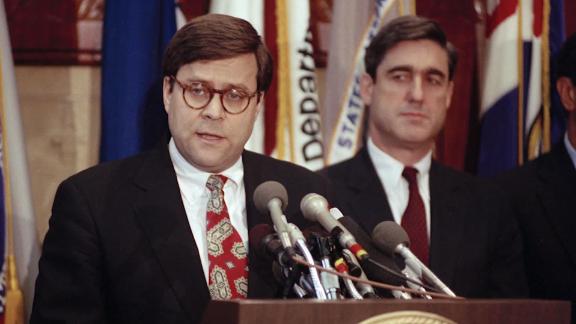 Special counsel Robert Mueller could be testifying before Congress as early as May 15, and there is no shortage of questions as Attorney General William Barr takes jabs at his handling of the Russia investigation. CNN's Jessica Schneider takes a closer look at their decades-long history.

The most remote hotel on Earth doesn't have cell phone service. But it has plenty of '90s DVDs. Here's what else you need to know to Get Up to Speed and Out the Door. (You can also get "5 Things You Need to Know Today" delivered to your inbox daily. Sign up here.)

President Trump seemed thrilled with the Mueller report. Apparently, his White House wasn't. In a five-page letter, White House lawyer Emmet Flood bashed special counsel Robert Mueller's report on the Russia investigation, calling it a "law school exam paper" and accusing Mueller of playing politics. Flood said Mueller should have made a decision on possible obstruction of justice charges against Trump. The report found no evidence that Trump's 2016 campaign colluded with Russia, but it was inconclusive on whether the President obstructed justice.

Meanwhile, House Democrats are still demanding that Attorney General William Barr release the full, unredacted report to them. If he doesn't, they're thinking about holding him in contempt. This is all just adding to the pressure to have Mueller testify before Congress.

The Pentagon says China is using espionage to steal secrets to help bulk up its military. A new report says China is using a variety of methods to obtain cutting-edge tech, including "cyber theft and exploitation of private Chinese nationals' access to these technologies." These techniques have helped China obtain military-grade equipment from the US, including aviation and antisubmarine warfare technologies. The chairman of the Joint Chiefs of Staff recently warned Congress that US companies doing business in China were often indirectly benefiting the Chinese military.

The doctor on a quarantined cruise ship has asked for 100 doses of the measles vaccine. The ship, owned by the Church of Scientology and with about 300 passengers and crew, left St. Lucia and is returning to its home port in Curaçao. One female crew member has the highly contagious disease. It's not clear when passengers will be allowed off the ship. Meanwhile, officials in New Jersey and Pennsylvania warn of measles exposures. An international traveler with a confirmed case was at Newark Liberty International Airport on March 12. And there may have been an exposure at Pittsburgh International Airport, too. Have questions about the measles? Here are some answers.

Don't go looking for Alex Jones, Louis Farrakhan or Milo Yiannopoulos on Facebook. The social media giant kicked them and several other high-profile people off its platform because they're considered "dangerous." Some critics scoffed at Facebook's move, saying it was only doing this to generate some good press and take attention away from its privacy and data-sharing woes.

Can't wait to hop on an e-scooter? You might want to take a safety course first. A new study found that 1 in 3 injured riders was hurt on their very first ride. And 63% of e-scooter riders had ridden nine times or fewer before their injury. E-scooters, from companies like Lime and Bird, flooded US cities last year, and they're still so new, they hadn't really been studied until now. Researchers say more training may be necessary to ensure the safety of e-scooter riders.

The number of people evacuated as Tropical Cyclone Fani makes landfall in India. Click here for the latest updates on the storm.

No one did more with a furry suit and a mighty roar than Peter Mayhew, the 7-foot-tall actor who played Chewbacca in the "Star Wars" movies. He died at age 74.

If you end up being swept out to sea, it's got to be some kind of sign when you're rescued by a boat named "Amen."

Have a secret crush on that cute Facebook friend? One of the social media app's new features just might hook you up.

Taylor Swift brought a marching band to the Billboard Music Awards, and the Beyhive freaked out. But Queen Bey's not the first to bring horns to a show.

We've apparently eaten all the Impossible Burgers. That's OK. Ikea is coming up with a new meatless meatball.

The April jobs report is out later this morning. Economists think it will be strong, but they're concerned by signs that indicate hiring is starting to slow down.

NASA Administrator Jim Bridenstine warned that these items are a threat to the planet.

I wanna dance with somebody

Yeah, we made it to the weekend! Let's go ahead and celebrate by sharing a few steps with the world's fastest folk dancers. (Click to view.)