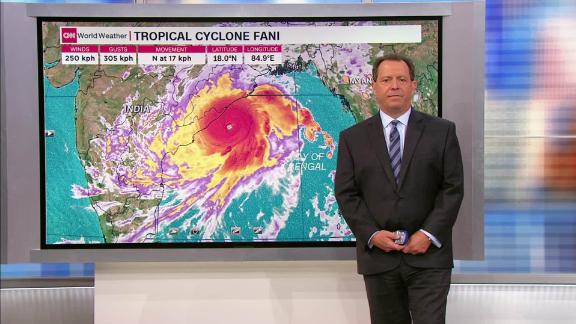 Fani is a powerful tropical cyclone with winds comparable to a super typhoon. CNN meteorologist Chad Myers is tracking the path of this dangerous storm as it moves closer to the India coast.

What is expected to be India's strongest tropical cyclone to make landfall in 20 years is barreling toward 100 million people on the country's east coast, prompting officials to begin emergency evacuations.

Fani, which is about 80 kilometers (50 miles) off the coast of Andhra Pradesh and Odisha states, is equivalent in intensity to a Category 4 hurricane in the Atlantic, or a super typhoon in the Pacific. (It's 2 mph away from a Category 5 hurricane, the highest on the Saffir-Simpson Hurricane Wind Scale.)

It is not expected to make landfall until Friday morning in Odisha, near the city of Puri, but tropical cyclone-force winds are already coming ashore in portions of Andhra Pradesh and will soon reach the Odisha coast as well.

With winds expected to be 240 kilometers per hour (150 mph) at landfall, Tropical Cyclone Fani would be the strongest storm to hit the region since a similar system struck Odisha in 1999, resulting in at least 10,000 deaths.

As Fani was classified as an "extremely severe cyclonic storm" in India, the country's coast guard and navy deployed ships and helicopters for relief and rescue operations. Army and air force units have also been put on standby in Odisha, West Bengal and Andhra Pradesh states.

Flights have been canceled from midnight Thursday at Bhubaneswar Airport in Odisha and for Kolkata Airport from 9:30 p.m. Friday, according to India's Ministry of Civil Aviation.

Eleven districts along the Odisha coast are on red alert, and some 900 cyclone shelters have been set up to house evacuees. Schools were shuttered across the state Thursday and Friday. Teams are going door to door to warn people.

"They are being told what to take with them if they leave and the precautions they need to take if they stay," said Ameya Patnaik, assistant commandant for the National Disaster Response Force in Odisha.

Evacuations have also begun in neighboring Andhra Pradesh, while those in West Bengal have been told to be ready to leave, officials told CNN. Fishermen have been warned not to venture out to the sea due to the extreme conditions.

Prime Minister Narendra Modi, who is seeking re-election, said Thursday he was reviewing the country's preparedness ahead of the cyclone's landfall.

"The Central Government is ready to provide all possible assistance that would be required. Prayers for the safety and well-being of our citizens," Modi said in a post on Twitter.

Fani is expected to bring large storm surges and significant wind damage near the landfall location. Inland flooding will also be a major threat.

Portions of eastern India and Bangladesh can expect 150 to 300 millimeters (6 to 12 inches) of rain, with locally higher amounts regardless of the intensity.

Fani will move nearly parallel to the coast as it approaches India. A slight move to the east or west would have a significant impact on the timing of landfall as well as its intensity. A more easterly track means that landfall would be farther north in India, perhaps even into Bangladesh.

If that happens, the storm would likely be weaker as it moves over cooler waters.

Fani is the first tropical cyclone of the year in the northern Indian Ocean, and the most powerful to occur there so early since the Bangladesh cyclone of 1991.

The season doesn't have a defined start and end like the Atlantic hurricane season, but it does have two main periods of activity: late April to early June, and October to November.

Tropical cyclone activity during the monsoon season is extremely rare because the monsoon is characterized by high wind shear, which makes it difficult for tropical storms to form.